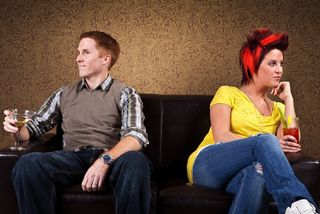 Being around strangers can cause people stress and, in turn, make them less able to feel others' pain, new research suggests.

But giving people a drug that blocks the body's stress response can restore that sense of empathy, scientists said. What's more, the same effect shows up in both humans and mice.

"In some sense, we've figured out what to do about increasing empathy as a practical matter," said Jeffrey Mogil, a neuroscientist at McGill University in Montreal. "We've figured out what stops it from happening and, therefore, the solution to make it happen more between strangers."

Decreasing stress by doing a shared activity could be a simple way to increase empathy between people who don't know each other, the findings suggest. [11 Tips to Lower Stress]

Past studies had found that mice seemed to feel the pain of familiar mice but were less responsive to foreign mice. Other studies found that, in both humans and mice, stress levels tended to rise around strangers.

To see how stress and empathy are connected, Mogil and his colleagues placed two mice together in a cage, then inflicted a painful stimulus on one of them. When the mice were cage mates, the unaffected mouse showed more signs of pain than when they were strangers. But when the team gave the mice a drug called metyrapone, which blocks the formation of the stress hormone cortisol, the mice responded equally to the strangers' pain.

These findings suggest that the stress response inhibited the ability to feel the pain of unfamiliar mice.

The team then tried a similar experiment with humans. They asked pairs of college undergraduates — either strangers or friends — to sit in the same room while one person put his or her hand in a bowl of icy water. Like the mice, strangers were more stressed out, as measured by cortisol levels, and also showed less tendency to "feel the pain" of their partners in the experiment. Those who were given metyrapone, however, made more grimaces and pained facial expressions when they saw strangers put their hand in the cold water.

But the team also found that having strangers play a game together (in this case, the video game "Rock Band") helped people get to know each other, and had the same effect as the drug.

The study suggests that people's default response is to be empathetic toward others but that stress inhibits their ability to feel others' pain. The findings also underscore how deeply hardwired the fear of stranger danger is, in both mice and humans.

"The mere presence of a stranger is enough to cause a measurable stress response," Mogil told Live Science.

From an evolutionary standpoint, that makes sense, as every meeting with a stranger has a higher risk of resulting in violence, Mogil said. But once people determine that another person is safe, their stress response likely subsides.

The findings may also explain the purpose of get-to-know-you mixers that corporations use with new employees: They may reduce the feeling of being with strangers, thereby making people feel more empathetic and increasing group cohesion, Mogil said.

The new study is interesting because "it suggests a shared mechanism between humans and mice, supporting the idea that empathy is a trait that is inherent to all mammals," said Frans de Waal, the C.H. Candler professor of primate behavior at Emory University in Atlanta, and director of the Living Links Center at the university's Yerkes Primate Center.

It also suggests an intriguing mechanism behind the regulation of empathy, said de Waal, who was not involved in the study. The big question for animals is no longer whether they have empathy, he said, but how it functions.

"In this regard, this study may represent a major advance, certainly food for further testing," de Waal told Live Science.

The study was published today (Jan. 15) in the journal Current Biology.