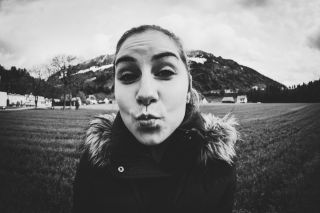 A new study found that selfies taken from 12 inches (30 cm) away result in a 30% increase in nasal size.
(Image: © Shutterstock)

If humans were meant to take attractive selfies, they would be born with 5-foot-long arms.

According to a research letter published today (March 1) in the journal JAMA Facial Plastic Surgery, 5 feet (1.5 meters) is the optimal distance for taking portraits that don't distort your facial features. Selfies taken just 12 inches (30 centimeters) away from the face, meanwhile, often result in a forced "funhouse mirror" perspective that can make your nose look up to 30 percent wider than it is, Dr. Boris Paskhover, study co-author and facial plastic surgeon, told Live Science.

"For years, I've heard patients and family members say, 'Oh, look at my nose, it looks so big,' when they show me a selfie," Paskhover said."I was always telling my patients, that's not how you really look. I knew that selfies distort how your nose looks. And I wanted to prove it."

In their new study, Paskhover and his colleagues at Rutgers New Jersey Medical School and at Stanford University in California created a mathematical model to describe the distortive effects of selfies taken at varying camera angles and distances. [5 Technologies for the Selfie-Obsessed]

The researchers modeled an average male and an average female face as a collection of parallel planes, similar to how an art student might draw a 3D building receding toward the horizon, Paskhover said. (Measurements taken for the "average" faces came from a random sample of racially and ethnically diverse participants around the United States, the authors wrote.)

Using these geometric models, the researchers were then able to calculate the relative distortion of various facial features as seen by a camera placed 12 inches (30 cm) away, 5 feet (1.5 m) away, and an infinite distance away from each face.

"Predictably, an image taken at 5 feet, a standard portrait distance, results in essentially no difference in perceived [nasal] size," the authors wrote. However, images taken 12 inches away resulted in a 30 percent increase in nasal size in men, and a 29 percent increase in women.

"The takeaway is, the selfie distorts your facial features," Paskhover said. What worries him, he added, is that this warped math of selfie perspective may be distorting how people actually see themselves. For example, according to a recent poll by the American Academy of Facial Plastic and Reconstructive Surgery Inc., 55 percent of surveyed plastic surgeons saw patients who wanted to look better in selfies in 2017.

"One of my concerns is, I don't want society in general to be distorted," Paskhover said. "I don't want people to think. 'This is what I look like,' when they see a selfie. You don't look like that — you look good."

So, before you consider investing in cosmetic rhinoplasty, ask yourself this: Should I invest in a selfie drone, instead?