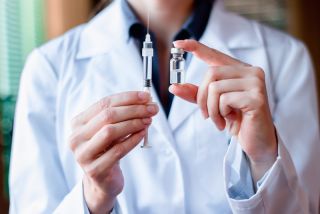 It's been a bad flu season, but this year's vaccine does offer some protection against the nasty bug, according to a new report from the Centers for Disease Control and Prevention (CDC).

CDC researchers estimate that this year's flu shot reduced people's risk of going to the doctor for flu-related visits by 36 percent overall. The shot was 25-percent effective against H3N2, the main strain of flu circulating this year, according to the report, which was published today (Feb. 15).

This year, the flu shot has been most effective for young children ages 6 months to 8 years; in this group, it has reduced the risk of going to the doctor because of the flu by 59 percent overall. (The researchers measured the vaccine's effectiveness by looking at people who went to the doctor for the flu, and examining whether or not they had been vaccinated.) The shot has also been 33-percent effective for those ages 18 to 49. However, for people in other age groups, including those over age 65 who are at particularly high risk for flu complications, the shot has not significantly lowered the risk of flu.

Still, these vaccine-effectiveness estimates are higher than those for Canada, which were released Feb. 1. Those results showed that in Canada, the vaccine was only 17-percent effective against H3N2. [6 Flu Vaccine Myths]

Although this year's flu shot offers less protection compared with the shot in some previous years, the CDC still recommends that everyone ages 6 months and older get a flu shot. This year's shot is more effective against flu strains other than H3N2: It is 67-percent effective against H1N1 and 42-percent effective against influenza B. Currently, these two strains of flu are causing about 10 to 15 percent of all flu illnesses this season, but infections with influenza B typically rise later in the flu season. [Can You Get the Flu Twice in One Season?]

In addition, even in years when flu-vaccine effectiveness is low, the shot still prevents thousands of hospitalizations related to the flu, the CDC said.