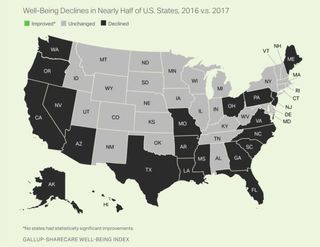 A map showing which states experienced declines in well-being in 2017.
(Image: © Gallup-Sharecare )

Last year was not a good one for Americans' happiness — a record number of states saw declines in their residents' well-being, according to a new poll.

The poll, from Gallup-Sharecare, found that residents' well-being declined in 21 states in 2017, compared with the levels in 2016. That's the largest number of states to see a drop in well-being over a single year since Gallup-Sharecare began the poll 10 years ago.

For comparison, during the Great Recession in 2009, 15 states saw declines in their residents' well-being, compared with the year before, Gallup said in a statement.

What's more, for the first time in the history of the poll, no state saw an increase in well-being in 2017, according to Gallup.

The poll is based on interviews with more than 160,000 U.S. adults in all 50 states, conducted from January to December 2017. The researchers calculated a "well-being score" for each state based on participants' answers to questions about different aspects of well-being, including their sense of purpose, social relationships, financial lives, community involvement and physical health. [See the Full List of the Happiest U.S. States]

States that saw declines in their well-being score in 2017 were primarily located in the South and West.

The declines were mostly driven by worsening scores in some measures of purpose and social well-being, as well as in mental health, Gallup said. For example, among states with declines in overall well-being, residents tended to report an increase in experiencing significant worry on any given day, a decline in reports of receiving "positive energy" from friends and family members, and an increase in clinical diagnoses of depression.

Amidst this decline, two states — South Dakota and Vermont —  led the nation's well-being rankings for the first time in the history of the Gallup-Sharecare poll. Both states had a well-being score of 64.1 out of 100 in 2017, placing them at the top of the list above Hawaii, which ranked third. (Hawaii has claimed the top spot in the poll six times in the last 10 years, including in 2016.)

Scores for both South Dakota and Vermont were unchanged in 2017 compared to 2016, which gave these states an advantage in the rankings at a time when many states saw declines, Gallup said. At the bottom of the rankings were Arkansas and Louisiana, followed by West Virginia, which has had the lowest well-being score in the nation for nine consecutive years..

State and business leaders should be concerned with this year's drop in well-being, Gallup said, because previous research has shown that workers with higher well-being perform better at work and are less likely to take unplanned time off, compared to workers with lower well-being.

In addition, people with higher well-being can better adapt to change and contribute to the success of their organizations and communities, Gallup said.

"State and community leaders can study and adopt best practices from states with consistently high well-being scores, such as Hawaii, South Dakota and Vermont, in order to maximize the chances that their own constituents are best able to lead a life well lived," the statement said.