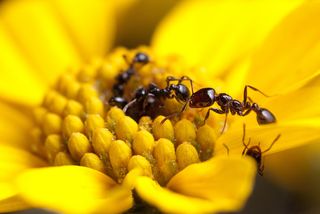 This photo shows foragers of the desert fire ant, Solenopsis xyloni; ants in this genus produce some of the strongest antimicrobials measured in social insects.
(Image: © Clint Penick)

Diseases can spread quickly among dense populations of organisms, whether they're people living in crowded cities or groups of social insects such as ant colonies. But some ant species are using homebrewed "antibiotics" to fight back.

To stop the spread of disease, some species of ants are known for producing antimicrobials — chemical compounds that kill pathogens — and researchers recently questioned how common this strategy is among these insects.

In a new study, scientists looked at species distributed across the ant family tree. Though it was widely suspected that all ants produced at least some antimicrobials, the researchers found that only about 60 percent of the species they investigated used antimicrobial agents to boost their colony's immunity.

Knowing which branches of ant lineages are antimicrobial producers could help fine-tune research for antimicrobials (which include antibiotics) that can be used in people, the scientists reported. [Image Gallery: Ants of the World]

When humans — or other animals with backbones and jaws — are infected with a pathogen, the immune system churns out proteins called antibodies that rally to the body's defense. Insects such as ants don't make antibodies — instead, they rely on other methods to repel microbial invaders, study co-author Adrian Smith, an assistant research professor of biological sciences at North Carolina State University, told Live Science in an email.

One such method is antimicrobial compounds, which the ants apply to their own bodies, to those of their nest mates and to their nests, Smith explained.

These compounds may be acquired from antimicrobial bacteria; for example, leafcutter ants are known to cultivate bacteria on their bodies that protect them against infection from parasites that feed on the fungus they grow as food. Other ant species produce antimicrobials from different internal glands, or harvest the ingredients from materials in their habitats such as tree resin.

Sharing these antimicrobials among the colony is an important aspect of the insects' communal behavior, Smith said.

"An individual’s success depends on the success of her colony," he said. "Having a means of socially controlling disease spread beyond an internal, personal resistance is crucial to maintaining a successful society."

Previous research documented and described ants' antimicrobial use, but had yet to evaluate how widespread this was across ant species, the scientists reported in the new study. To find out, they looked at 20 ant species collected around Raleigh, North Carolina, testing workers to see if compounds found on their bodies would affect the growth of a bacterium called Staphylococcus epidermidis.

And the ants had a few surprises in store for the scientists.

The study authors expected to see all the social ants producing some type of antimicrobial compound, but 40 percent of the ants didn't appear to have any at all. The scientists also guessed that the strongest antimicrobials would be found in bigger ants, or in ants living in large colonies, which would be more vulnerable to disease outbreaks. However, the strength of the ants' chemical cocktails didn't line up with body size or colony size, the researchers reported.

In fact, the most potent antimicrobial was produced by one of the smallest ants in the study — Solenopsis molesta, also known as the thief ant — which also lives in some of the smallest colonies.

So, what are these other ants doing to protect themselves — and their colonies — if they're not cultivating antimicrobials? It's hard to say for sure, but further investigation could uncover currently unknown methods for pathogen protection, which could open new avenues for fighting diseases in humans, Smith said.

"Some of the most useful lessons we can learn about disease resistance from ants might be those we least expect to learn," he said. "My bet is that those 'negative results' in our study are pathways to even more exciting insights into disease ecology."

The findings were published online Feb. 7 in the journal Royal Society Open Science.