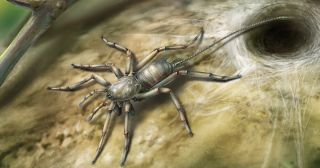 A 100-million-year-old spider trapped in amber has something you just don't see nowadays — a tail.

No living spider species today have tails, but the ancient arachnid sported a long, whip-like one. At 0.1 inches (3 millimeters), the tail was slightly longer than the spider's 0.07-inch (2 mm) body. The tail probably served a sensory purpose, said Paul Selden, a University of Kansas researcher, who co-authored a new study about the discovery published Feb. 5 in the journal Nature Ecology & Evolution.

"Any sort of flagelliform appendage tends to be like an antenna," Selden said in a statement. "It's for sensing the environment."

Not much is known about the lifestyle of the little spider, which was found in amber from the mid-Cretaceous period in what is now northern Myanmar. It had spinnerets, meaning it could weave silk, the researchers reported, but that doesn't mean it wove webs. Spiders use silk for everything from wrapping eggs to lining burrows, Selden said.

And because it was trapped in amber, the spider probably lived on or around tree trunks, Selden said. During the Cretaceous, northern Myanmar was covered in tropical rainforest, Selden said, and it was home to many spiders like ones seen in Southeast Asia today. [Goliath Birdeater: Images of a Colossal Spider]

"That's why the new one is really interesting, apart from the fact that it's much younger — it seems to be an intermediate form," he said. "In our analysis, it comes out sort of in between the older one that hadn't developed the spinneret and modern spider that has lost the tail."