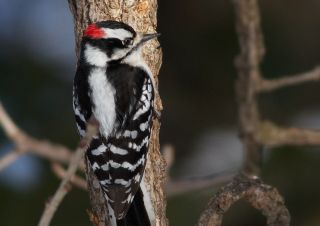 A downy woodpecker (Picoides pubescens) may drum out a beat to attract a mate, establish territory or search for food.
(Image: © Copyright Arlene Koziol/The Field Museum)

Scientists may have just pecked new holes in the widely held idea that woodpeckers' brains suffer no ill effects from the considerable force generated by their high-speed pecking.

A new study — the first to examine the birds' brains — shows that woodpecker brains are not immune to these repeated impacts, and that they experience a type of protein accumulation that is associated with trauma and brain damage in humans.

However, it's unclear if the presence of this protein, known as "tau," points to brain damage in the birds. In fact, tau might even serve as a protective adaptation, providing a buffer around the birds' neurons that insulates them against harm, according to the study. This new insight into woodpecker brains could inspire researchers to take a closer look at the proteins that have been linked to brain damage in people, the study authors told Live Science. [5 Ways Science Could Make Football Safer]

A woodpecker hammering away at a tree experiences forces up to 1,400 times that of Earth's gravity, or 1,400 G's. To put that into perspective, humans can withstand about 8 G's of continuous momentum before eventually blacking out, and a sudden application of 50 G's would detach most of our organs. Even relatively small amounts of g-force in people can cause concussion, lingering pain in the neck and back, and red dots on the skin from ruptured capillaries — known as "G-measles" or "geasles" — according to Go Flight Medicine, a website for aviation and medical professionals.

How do woodpeckers do it? They have a number of special physical features, such as skulls with spongy layers — particularly in the front regions — that cushion their brains. Robust neck muscles also help to soften the impact, while thick inner eyelids protect their eyes.

For generations, scientists accepted that woodpeckers didn't develop abnormalities in their brains from the repeated impacts. Then again, no one had ever checked woodpecker brains for signs of damage, the study authors noted. As the woodpecker lineage has been around for about 25 million years, it was widely thought that the birds couldn't possibly have any serious brain issues, study co-author Dr. Peter Cummings, an assistant professor of anatomy and neurobiology at the Boston University School of Medicine, told Live Science.

But in the new study, the researchers looked for evidence where no one else had before: in the tissues of woodpeckers' brains. To do that, study lead author George Farah, then a graduate student at the Boston University School of Medicine, had to figure out how to remove the organ in one piece.

"It took some trial and error," he told Live Science.

Unlike the human skulls that Farah had previously dissected, woodpeckers' skulls have a bony plate protecting their optic region, which is located by the brain stem and is quite large, he said. Farah used a Dremel tool and very fine scalpels, cutting far lower in the back of the skull than he would have in a human, to accommodate removal of the optic region and part of the brain stem along with the other portions of the brain, Farah said.

He then stained the tissue to reveal tau proteins, which showed up in the woodpeckers' brains but not in the brains of other types of nonpecking birds in the experiments' control group, Cummings said. [Inside the Brain: A Photo Journey Through Time]

Tau proteins stabilize neurons, and they can appear in human brains for a number of reasons, including injury, neurodegenerative disease and normal aging processes, Cummings noted. Tau itself isn't necessarily a problem, but the buildup of tau proteins in humans can interfere with neuron function and is associated with the brain disease known as chronic traumatic encephalopathy, or CTE. CTE can lead to symptoms such as depression, memory loss and difficulties in cognition and motor abilities, and the disease tends to worsen with time, Live Science previously reported.

The presence of tau proteins in woodpecker brains shows that their brains are not invulnerable to the effects of forceful pecking. Nevertheless, the tau proteins aren't necessarily hinting that woodpeckers suffer from pecking-related neurodegenerative disease or brain damage, the scientists wrote in the study.

"Something — tau — was there that shouldn't necessarily be. But whether it's a good thing or a bad thing, we don't know," Farah said.

"I wonder if what we're seeing in the woodpeckers may be a protective mechanism for the neurons," Cummings added. "You have skull modifications, tongue modifications —why would that stop at the brain? Why would the brain not participate in that process of evolutionary adaptation, and molecularly do that by the expression of a protective protein that may help stabilize neurons during that pecking procedure?"

The next step is to figure out what kind of tau proteins are involved in this protective mechanism and what other proteins are linked to them, the researchers said.

The findings were published online Feb. 2 in the journal PLOS ONE.