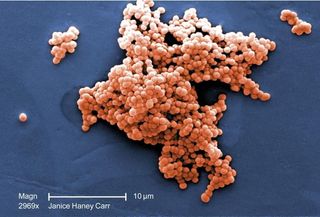 An Arizona woman who was initially diagnosed with the flu turned out to have a life-threating infection with "flesh-eating" bacteria, according to news reports.

The woman, Christin Lipinski, visited her doctor with flu-like symptoms and pain under her arm, according to ABC15 Arizona. She was diagnosed with the flu on Jan. 11 and initially treated for the viral infection. But her pain continued to get worse until it was "pretty much unbearable," her husband, Nate Lipinski, told ABC15.

Two days after her flu diagnosis, she was rushed to the hospital, where she had surgery to treat necrotizing fasciitis. The condition is a serious bacterial infection that destroys skin and muscle tissue, according to the Centers for Disease Control and Prevention (CDC). Surgeons had to remove over 30 percent of Lipinski's soft tissue that had been infected, according to her GoFundMe page. It's not clear how Lipinski got the infection.

Some symptoms of necrotizing fasciitis appear similar to symptoms of the flu, including fever, chills, fatigue and vomiting, according to the CDC. But in addition to these symptoms, patients often experience pain that they describe as hurting much more than they would expect based on how their wound looks, the CDC said. Patients' skin may become red or purplish from the infection, and these swollen areas may spread rapidly.

The condition is treated with antibiotics, but many people also need immediate surgery to remove dead tissue and help stop the infection, the CDC said. The disease has a fatality rate of about 27 percent, according to a 2008 study.

Lipinski underwent seven surgeries to try to stop her infection, according to her GoFundMe page. She was transferred to a hospital that specializes in treating necrotizing fasciitis, and she will need skin grafts and "extensive reconstructive surgeries" in order to recover, the page said.