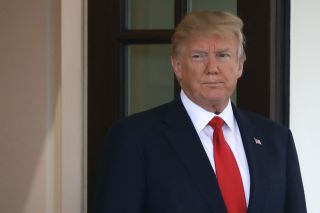 Trump scored a perfect 30 out of 30 points on the Montreal Cognitive Assessment (MoCA, pronounced "mocha"), which he took in an apparent effort to put to rest questions about his mental abilities, The New York Times reported.

The test itself is fairly straightforward and widely available in PDF form online. The test asks patients to perform various simple cognitive tasks, like memorizing strings of words, identifying pictures of animals and drawing a clock with hands set to particular times. [10 Ways to Keep Your Mind Sharp]

It's not difficult for a person without any cognitive impairment to get a perfect score on the MoCA, said Dr. Collin Herman, a neurology resident physician at Wake Forest Baptist Medical Center, in North Carolina.

"A person operating at full capacity, not coming off a 12-hour shift or sleep-deprived, should be able to get everything right, maybe missing one at the most," Herman told Live Science.

Each of the questions on the test is designed to probe for "mild cognitive impairment" in different areas of the brain, Herman said. Different forms of dementia, including the well-known Alzheimer's disease, first appear as small deficits in the areas of the brain they damage.

Herman said he wouldn't have been surprised to see Trump, who is 71, miss one or two questions simply due to advanced age.

"I wasn't sure what to expect, honestly, from his MoCA," Herman said. "[A perfect score] is certainly not out of the realm of possibility if the test was administered correctly, and it would certainly favor against mild cognitive impairment or a brewing dementia."

But Herman also cautioned against reading too much into a single MoCA.

"It's not always foolproof," he said. "We always talk about, what if someone has an exam or a [medical] history that really indicates they have a significant impairment in their home life, or they're not able to do their own finances, and they're having trouble cooking — all kinds of things that say maybe this person has dementia — and then they score amazingly on this test. What does that mean?"

Herman said there are a few reasons someone might appear to have dementia symptoms but not miss questions on the MoCA.

"Really highly educated folks tend to score better automatically on these exams. [Experts] also talk about, instead of being a true dementia or mild cognitive impairment, you can have a lot [of], in older folks, depression," he said, adding that depression and dementia can sometimes have similar outwardly visible symptoms.