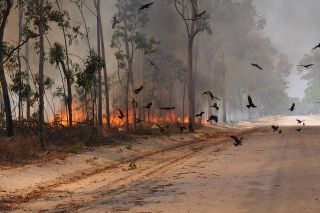 Black kites (Milvus migrans) circle near a roadway during a fire on the Cape York Peninsula in Queensland, Australia.
(Image: © Dick Eussen)

Grassland fires that are deadly and devastating events for many kinds of wildlife are a boon to certain types of birds known as fire foragers. These opportunists prey on animals fleeing from a blaze, or scavenge the remains of creatures that succumbed to the flames and the smoke.

But in Australia, some fire-foraging birds are also fire starters.

Three species of raptors — predatory birds with sharp beaks and talons, and keen eyesight — are widely known not only for lurking on the fringes of fires but also for snatching up smoldering grasses or branches and using them to kindle fresh flames, to smoke out mammal and insect prey. [10 Animals That Use Tools]

Scientists recently collected and evaluated reports from Aboriginal and nonindigenous people of these so-called firehawks — black kites (Milvus migrans), whistling kites (Haliastur sphenurus) and brown falcons (Falco berigora) — to better understand this unusual behavior, and to evaluate its implications for fire management in regions where the birds are active, the researchers wrote in a new study.

Aboriginal people in some parts of northern Australia referenced the fire-spreading actions of firehawks in sacred rituals and noted numerous sightings of the firehawks. In total, the study authors identified 12 Aboriginal groups in which people described firsthand sightings of raptors deliberately setting new fires with smoldering brands salvaged from existing fires, acting on their own and cooperating with other birds.

"I have seen a hawk pick up a smoldering stick in its claws and drop it in a fresh patch of dry grass half a mile away, then wait with its mates for the mad exodus of scorched and frightened rodents and reptiles," an Aboriginal man named Waipuldanya recalled in "I, The Aboriginal," a 1962 autobiography ghostwritten by journalist Douglas Lockwood, according to the research article.

"When that area was burnt out, the process was repeated elsewhere," he reported.

"When a fire burns into a creek line and burns out, brown falcons have also been observed collecting fire brands and dropping them on the other unburnt side of the creek in order to continue the fire," according to a collection of Aboriginal accounts published in 2009, the study authors wrote.

Jump into the fire

The researchers also conducted interviews with non-Aboriginal sources and scoured prior studies for stories of the fire-seeking birds. Two of the researchers also contributed their own observations gleaned from decades of fieldwork and encounters with bushfires in the Australian grasslands.

From their reports, a behavioral pattern emerged: Firehawks (also described as kitehawks, chickenhawks and, on several occasions by non-Aboriginals, s---hawks) purposely swiped burning sticks or grasses from smoldering vegetation — or even from human cooking fires — and then made off with the brands and dropped them into unburned areas to set them alight, presumably to drive out more prey.

The firehawks "come out of nowhere when you start a fire because they know that the feed is on," one interview subject told the study authors.

Another man described a group of birds that appeared to work together to steal embers from an existing blaze to start a new fire some distance away, according to the study.

"Certain raptors either restart extinguished fires or move fires across barriers that might otherwise hamper the fire's spread," the study's lead author, Mark Bonta, an assistant professor of Earth sciences at Penn State Altoona, told Live Science in an email.

"In the case of co-authors Nathan Ferguson's and Dick Eussen's accounts, they saw the behavior repeatedly and at close range, including failed attempts, but also successful attempts," Bonta said. [How Raptors Use Their Deadly Talons]

Jump into the fire

The range of the birds' reported fire stealing spans a significant area measuring approximately 1,490 by 620 miles (2,400 by 1,000 kilometers) across part of northern Australia, the scientists reported.

Photos and videos of firehawk behavior remain scarce, and it can be challenging to observe the birds while fires are blazing. Therefore, officials typically overlook firehawk activity when creating strategies for managing fires, which are commonly used in Australia by Aboriginal groups and non-Aboriginal landowners for ecosystem management, the study authors wrote.

"This May, we are leading a team to Northern Territory to work with Aboriginal ranger groups who will set controlled burns for us, so we can study the dynamics of raptor behavior under semi-controlled conditions. No one has ever done this before," Bonta said.

Close collaboration with Aboriginal teams and individuals will be a critical part of studying the birds' use of fire and its relationship to the Australian tropical grasslands, which indigenous people have inhabited and managed with controlled burning for at least 50,000 years. Over millennia, Aboriginal people have accumulated an unparalleled understanding of this ecosystem and the animals that inhabit it — knowledge that is in danger of being lost as cultural traditions are abandoned by younger generations, Bonta explained.

"Our work is a collaborative effort to help valorize indigenous knowledge of birds, particularly as known to the older generations — this is not simply 'folklore' but rather intricate ecosystem knowledge that is typically unparalleled even by most outsider experts," he said.

The findings were published online in the December 2017 issue of the Journal of Ethnobiology.