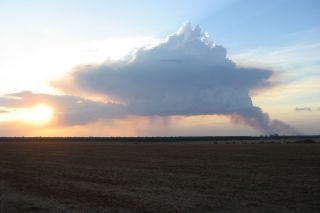 Just like thunderstorms, the anvil-shaped clouds appear when warm air rises from the ground. But instead of summertime heat spurring the convection, it's the raging fire that forces hot air upward. Higher in the atmosphere, the air then cools, and water vapor condenses into pyrocumulus clouds, explained Glenn Yue, an atmospheric scientist at NASA Langley Research Center in Hampton, Va. Sometimes, the pyrocumulus clouds become storms, with strong winds, lightning and even rain, Yue said.

"These clouds can influence local weather, and when they're very large, they can last for days," Yue told LiveScience.

Pyrocumulus clouds are quite common during fires, Yue said. He co-authored a study, published in the September 2010 Bulletin of the American Meteorological Society, that detected 17 pyrocumulus storms in North America in one year.

Recently, Yue and other researchers discovered that pyrocumulus clouds can carry smoke and pollutants into the stratosphere, the layer of Earth's atmosphere that is home to the protective ozone layer, and located above the layer of air we breathe (the troposphere). A single fire cloud can inject particles as high as 10 miles (16 kilometers) up into the atmosphere. These particles can interact with and destroy protective ozone, but they may also slow global warming by reflecting sunlight away from Earth.