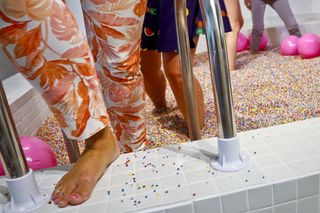 I scream, you scream, we all scream for…inedible plastic?
(Image: © Bebeto Matthews/AP/REX/Shutterstock)

Multicolored, sugary sprinkles are a popular topping for ice cream cones and sundaes, but a swimming pool filled with fake sprinkles at a Florida pop-up museum recently landed the institution in hot water.

The Museum of Ice Cream celebrates the dairy treat through frozen-dessert-themed interactive experiences and design elements that offer numerous photo opportunities for sharing on social media. But Miami Beach city officials recently fined the museum for creating an environmental hazard with their fake sprinkles, which filled a so-called "Sprinkle Pool" that visitors could frolic in, burying themselves in the tiny bits of brightly colored plastic, Miami's Local10 News reported.

Candy-like particles were escaping the exhibit — likely hitchhiking to freedom on enthusiastic sprinkle divers — and had been detected in nearby storm drains, raising concerns that they could disperse into local waterways, according to Local10 News. [Photos: Trash Litters Deep Seafloor]

The temporary museum opened to the public in Miami on Dec. 13, 2017, and closes Jan. 22. This is the Museum of Ice Cream's fourth location since its New York City debut in July 2016, and the museum promised "physical, digital and experiential dialogues" in a statement released prior to its Miami opening.

But the contents of the museum's immersive Sprinkle Pool proved to be problematic to contain. Concerns about wayward sprinkles prompted officials to slap the museum with a $1,000 fine, and to initiate inspections to make sure that the sprinkles stayed in their designated area, Local10 News reported.

Plastic pollution poses a threat to many types of sea life, which mistake the indigestible bits for food. Most plastics are made from fossil fuels and do not biodegrade, and humans have produced a staggering amount — approximately 9 billion tons, half of which was made in the past 13 years, researchers reported in a global analysis conducted last year. About 440 million tons (400 million metric tons) of plastic are generated each year, of which about 1 to 2 percent ends up in the ocean, the researchers wrote in the study.

The world's oceans are thought to hold approximately 5.25 trillion pieces of plastic, about 92 percent of which is microplastics — fragments measuring under 0.19 inches (5 millimeters) in length.

Plastic has even penetrated the deepest reaches of the ocean, with creatures living at the bottom of the Mariana Trench — about 36,000 feet (10,970 meters) below the surface — containing microplastics in their guts, scientists found in November 2017.

The Ice Cream Museum is currently taking steps to contain "sprinkle residue" in the surrounding area, representatives said in a statement issued to the Miami New Times on Jan. 3. Their efforts include hiring "multiple cleaners" to sweep areas near the museum building, installing blowers at the Sprinkle Pool exits, and layering drains with felt to catch wayward sprinkles. The museum is also investigating a biodegradable sprinkle formula for future use, according to the statement.