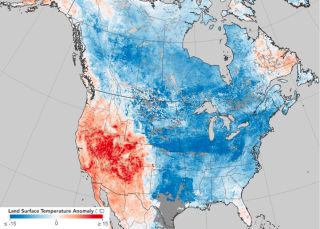 This temperature anomaly map is based on data from the Moderate Resolution Imaging Spectroradiometer on NASA's Terra satellite. It shows land surface temperatures from Dec. 26, 2017 to Jan. 2, 2018, compared with the 2001–2010 average for the same eight-day period.
(Image: © NASA Earth Observatory)

The "bomb cyclone," with its whipping winds and foot-plus snowdrifts, has passed, but even more teeth-chattering weather has blanketed the eastern U.S. in its wake.

Temperatures of 20 to 30 degrees Fahrenheit (11 to 17 degrees Celsius) below normal are keeping people bundled up from the Midwest to the Northeast, according to the National Weather Service (NWS). With the blistering winds fueled by the storm, temperatures feel even colder still, with wind chills into the negative double-digits.

The cold has seeped even farther south, with temperatures in the 30s and 40s Fahrenheit (in the single digits Celsius) in South Florida. It's so cold people on social media have reported seeing frozen iguanas fall from trees, stunned by the chill. [Photos: The 9 Snowiest Places on Earth]

The frigid weather is part of an overall pattern that has held since the holidays, keeping the eastern half of the country shivering with an added boost from a particularly intense storm that helped to continue drawing air down from the Arctic, said Greg Carbin, branch chief for the NWS's Weather Prediction Center.

The East Coast is one of only a few cold spots on the global map, though, as most areas of the world are warmer than normal. As the planet's baseline temperature rises from continued human emissions of heat-trapping greenhouse gases, record cold becomes less and less likely.

"These are all pretty substantial cold weeks of record," Carbin told Live Science.

The storm that dumped snow over the Northeast on Thursday added a little oomph as it rapidly intensified, or "bombed out," off the coast. The central pressure of the storm dropped 50 millibars in 24 hours, a rare event that records suggest happens only once ever 25 to 30 years, Carbin said. (A millibar is a unit that effectively measures the weight of the atmosphere overhead.)

That rapid deepening fueled the storm's heavy snows and punishing winds and maintained the flow of Arctic air.

It "kind of just greases the skid for another blast," of frigid air, Carbin said.

The clear conditions settling in after the storm, along with the substantial snowpack, will also help depress temperatures through radiational cooling. Earth's surface radiates infrared energy at night, and with no clouds to absorb it and send some of it back, it escapes to space and temperatures can plummet.

But the deep freeze won't last forever, even if it seems like it already has. "It's difficult to sustain such an extreme pattern for very long, even in the midst of winter," Carbin said.

Temperatures will gradually start warming next week, and the temperature pattern over North America looks to flip toward the middle of the month. That means the eastern half of the country will be warmer than normal, while cooler and wetter weather affects the West.