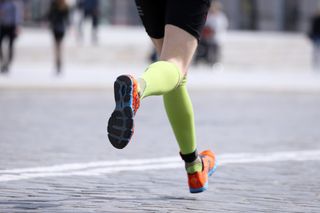 Running long distances can be hard on the body, but as one ultramarathoner found out, it can also take a toll on an individual's red blood cells.

According to a recent case report, all the pounding that happens when a runner's feet hits the pavement could directly injure that person's red blood cells.

In the case, which was published Dec. 13 in the journal BMJ Case Reports, a 41-year-old man who regularly trained for and competed in 50- to 100-mile ultramarathons was diagnosed with a condition called "footstrike hemolysis."  (An ultramarathon is any race longer than marathon distance, or 26.2 miles [42.2 kilometers].) [27 Oddest Medical Cases]

This phenomenon — which is diagnosed mostly in endurance athletes — occurs when people repeatedly land on their feet with the force of their body weight, such as when they're running. This causes a small amount of red blood cells to rupture within the small blood vessels, or capillaries, in the soles of the feet, said case report co-author Dr. Katharine DeGeorge, an assistant professor of family medicine at the University of Virginia School of Medicine in Charlottesville, who treated the man.

The man in the case felt fine and had no physical complaints, such as fatigue or a lack of energy. Rather, he went to see his doctor because he was concerned about a blood test result from a recent health screening.

The blood test showed that the man had a mild case of "macrocytic anemia," and he wanted to know why he had this deficiency and whether it might affect his performance at an ultramarathon, according to the case report.

Macrocytic anemia means that a person's red blood cells are abnormally large in size, and, in addition, they do not carry enough oxygen, according to Medscape. Red blood cells help transport oxygen throughout the body.

Even though the ultramarathoner had no symptoms, to ease the man's worry, his doctors investigated what might have been causing his mild anemia.

After a physical exam and additional testing, his doctors ruled out minor gastrointestinal blood losses, which long-distance runners sometimes experience. They also eliminated another cause, "runner's pseudoanemia," which is a mild anemia that runners have; it can occur with regular physical training. [The 10 Strangest Medical Cases of 2017]

Although the man's medical history revealed he had "Gilbert's syndrome, an inherited, but harmless, liver condition that may sometimes cause jaundice, his doctors determined that this condition was not causing damage to his red blood cells.

Eventually, they decided the most likely explanation for the man's mild anemia was the repetitive and forceful striking that occurred to the bottom of the man's feet. Such constant foot strikes increase the likelihood and extent of red blood cell destruction within the blood vessels of the feet, DeGeorge told Live Science.

Footstrike hemolysis is not only seen in long-distance runners: It has also been observed in other types of athletes, such as cyclists and swimmers, and in nonathletes, such as soldiers after a strenuous march, DeGeorge said.

Because the man's mild anemia was considered "clinically insignificant" — in other words, it did not affect his body's functioning, and it did not impact his athletic performance or endurance in any way — he did not need to make any changes to his workouts, training or lifestyle, DeGeorge said.

For example, the man didn't have to reduce the number of miles he ran or switch from the surface he typically ran on, which was pavement, DeGeorge said. Other changes to his routine were also unnecessary: He was already wearing properly fitting running shoes, which he replaced at the recommended intervals; eating a healthy diet; and sticking to a good training schedule, she noted.

The man continues to run long distances without the need for any treatment, the report authors wrote.