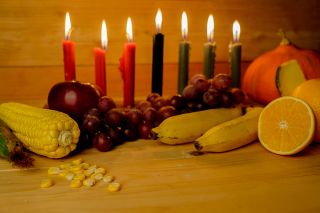 The seven candles — three red, three green and one black — represent the Seven Principles of Kwanzaa.
(Image: © MIND AND I/Shutterstock)

Kwanzaa is a cultural holiday that celebrates African heritage and identity. The name comes from the Swahili phrase "matunda ya kwanza," which translates to "first fruits," and the holiday is based on traditional African harvest festivals. Kwanzaa is a relatively new holiday, created in 1966 by Maulana Karenga, a professor and department chair at California State University, Long Beach. It is a cultural holiday, not a religious one, according to OfficialKwanzaaWebsite.org, "thus available to and practiced by Africans of all religious faiths who come together based on the rich, ancient and varied common ground of their Africanness."

Kwanzaa is observed from Dec. 26 to Jan. 1. The seven days correspond to the Seven Principles, or Nguzo Saba. Seven candles are lighted during Kwanzaa, and seven symbols are placed around the home.

Kwanzaa is celebrated for seven days to emphasize the Nguzo Saba and to celebrate family, community and culture.

The Nguzo Saba are common among many African cultures, according to Dawn Hicks Tafari, a professor at Winston-Salem State University and co-founder of the Greensboro Kwanzaa Collective, which organizes the city's celebration. The Seven Principles "help people of African decent focus on ways to reinvigorate pride in and celebrate African culture by acknowledging our connection to African cultures and traditions."

The Nguzo Saba are:

The seven Kwanzaa symbols that are placed around the home represent African cultural values that contribute to community building and reinforcement. According to Tafari, they are:

Each family celebrates Kwanzaa in their own way, according to History.com, but celebrations often include dances, singing, storytelling, poetry reading and a large traditional meal.

Tafari said she and her family celebrate Kwanzaa by decorating their home with crafts made by her children and by laying the seven symbols on their table. Each night, Tafari's family gathers around their display, prays, pours libation, lights the candle of the day, discusses what the principles of Kwanzaa mean to them, and how they have demonstrated the principles throughout the year and how to improve in the following year. Afterwards, they enjoy African drumming, dance, tell stories, and create crafts.

Friends are often invited on the final night of Kwanzaa to share in a karamu, or feast. "We always had such a wonderful time during out home Kwanzaa celebrations," Tafari told Live Science. "However, during our 2009 celebration, we noticed that more and more people were beginning to celebrate with us, and the celebration was out-growing our home." The result was Tafari and her family partnering with two other families in the area to start the Greensboro Kwanzaa Collective, a seven-day, citywide celebration that offers a fun, educational, and culturally enriching experience to all families.

The meaning behind Kwanzaa

Tafari said Karenga created Kwanzaa during the height of the civil rights movement in response to the social and political climate. "Black people were struggling for equal rights … freedom from oppression, and relief from systematic injustices that robbed us of our ability to live lives filled with joy, pride, and self-expression."

Kwanzaa is a time, according to Tafari, to remember that the history of African-Americans does not begin with the slave trade, but dates back much further.

The philosophy of Kawaida, according to a 2007 article by Karenga, which also came out of the civil rights movement in the 1960s, is incorporated into the meaning behind Kwanzaa. Kawaida, according to the article, is a philosophy "dedicated to cultural revolution, radical social change, and bringing good in the world." It is based on aspects of various African cultures as a basis for bringing community members together against the struggle for equality during a time of turmoil.

Kwanzaa, according to the African Studies Center at University of Pennsylvania, may have been created to counter the commercialism of Christmas, and it shares similarities with holidays such as Thanksgiving and the Yam Festival of Ghana and Nigerian. However, Kwanzaa is not meant to be a replacement for Christmas, Hanukkah or any other religious-based holidays — it can be celebrated in conjunction with any of them, according to OfficialKwanzaaWebsite.org.