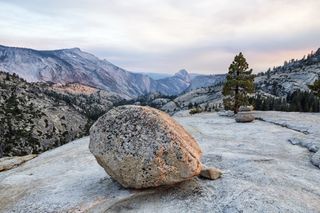 The Sierra Nevada range rose almost an inch during California's recent drought due to loss of water from within fractured rocks.
(Image: © Trailkrum/CC BY-NC 2.0)

Wouldn't you love to grow an extra inch taller — by sweating? According to NASA scientists, it is possible to grow an inch or more in height just by displacing water weight. The caveat: It only works if you're an actual mountain.

Researchers at NASA's Jet Propulsion Laboratory (JPL) in Pasadena, California, observed that the Sierra Nevada mountain range grew about an inch (2.5 centimeters) in height after a period of prolonged drought between October 2011 and October 2015. The culprit was huge amounts of water draining out of the mountain's rocks and soil, and into the Earth below.

"This suggests that the solid Earth has a greater capacity to store water than previously thought," Donald Argus, a JPL research and lead author of the study, said in a statement. The team's findings were recently published in the Journal of Geophysical Research: Solid Earth. [In Photos: The Magnificent Sierra Nevada Mountains]

Why mountains rise and fall

There are myriad reasons mountains and other land formations can gain or lose height over time. In general, the surface of the Earth sags under water weight and rebounds in height when the water is displaced by drainage or evaporation. Tectonic plate movement, volcanic activity (like this huge magma bulge in Antarctica) and high- and low-pressure weather systems can all contribute to surface uplift or depression as well, the study authors noted. This all occurs naturally, but human activity, like groundwater pumping, can have a noticeable impact too.

In the new study, Argus and his colleagues analyzed 11 years of data from 1,300 GPS stations in the mountains of California, Oregon and Washington to map changes in the Sierra Nevada range's elevation to within a few millimeters.

At first, the researchers thought the biggest factors in the range's remarkable growth between 2011 and 2015 were tectonic uplift and extensive groundwater pumping in the nearby California Central Valley. When two tectonic plates collide, the smash-up can drive magma to the surface, which then cools and hardens, leading to uplift. However, calculations revealed that of the inch of observed uplift in the Sierras, only 0.2 inches (0.5 cm) could be attributed to groundwater pumping, and less than half of that came from tectonic shifts. The remaining two-thirds of an inch (1.7 cm) in increased elevation came from Earth's elastic response to water loss in the mountains, the study said.

The team found that, between 2011 and 2015, about 10.8 cubic miles (45 cubic kilometers) of water drained out of cracks in the mountains and into the solid Earth below. As mountains are relieved of their water weight, they undergo a process called elastic rebound and slowly rise back to their original elevation before the water pressed them down.

For comparison, the water lost in the Sierra Nevada range in four years amounts to about 45 times as much water as Los Angeles uses in one year, according to the statement — far more water loss than current hydrology models account for. In the following two years, which saw greater snow and rainfall, the mountains regained about half as much water, and shrank about half an inch in height. So currently, the range is about a half-inch taller than it was in 2011.

The water displaced by the mountains drains too deeply to be accessible.However, the techniques used to analyze water loss and elevation in this study pave the way to a more accurate understanding of mountain groundwater's impacts, the researchers said.

"One of the major unknowns in mountain hydrology is what happens below the soil," NASA Propulsion Lab water scientist Jay Famiglietti said in the news release. "What does the water table look like within mountain ranges? Is there a significant amount of groundwater stored within mountains? We just don't have answers yet, and this study identifies a set of new tools to help us get them."