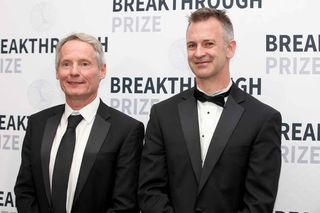 Two mathematicians have each earned the (massive but countable) sum of $3 million for a proof that could one day help scientists understand extra dimensions.

Christopher Hacon, a mathematician at the University of Utah, and James McKernan, a mathematician at the University of California at San Diego, won this year's Breakthrough Prize in Mathematics for proving a long-standing conjecture about how many types of solutions a polynomial equation can have. Polynomial equations are mainstays of high-school algebra — expressions like x^2+5X+6 = 1 — in which variables are raised to the whole number exponents and added, subtracted and multiplied. The mathematicians showed that even very complicated polynomials have just a finite number of solutions. [Images: The World's Most Beautiful Equations]

The Breakthrough Prize, which is the largest individual monetary prize given in the sciences, is sponsored by Sergey Brin, co-founder of Google; Facebook founder Mark Zuckerberg; Chan Zuckerberg Initiative co-founder Priscilla Chan; Anne Wojcicki, the founder of 23andme; and tech entrepreneurs Yuri and Julia Miler and Pony Ma. The awards go to researchers in the fields of life sciences, fundamental physics and mathematics. This year's winners received a total of $22 million in prize money.

Like many of the most important math conjectures, anyone who studied quadratic equations in 10th-grade algebra can understand the basic question that Hacon and McKernan cracked. But the solution, a devilishly technical math proof that spans hundreds of pages of computer-like text, is only comprehensible to a tiny circle of experts around the world, Hacon said.

The basic question is: Given a certain type of polynomial equation — for instance, x^2 + y^2 = r^2 (where x and y are the variables) — how many different shapes of solutions exist?

Polynomials of different types represent different shapes: for instance, the equation above defines a circle, whereas other well-known classes of polynomials define spheres, donuts or football shapes. The more variables, the more dimensions the polynomial describes, and the more possible shapes the solutions may take.

For decades, mathematicians have had an inkling that polynomials with many dimensions still had a finite number of solution shapes. But proving that idea, called the "minimal model program in all dimensions," had eluded the brightest minds in the field.

The new proof shows that this mathematical intuition is indeed correct, at least for a certain class of shapes (those, such as a donut, that have at least one hole).

To solve this proof, the researchers used a highly technical "lemma," or an argument based on a much less interesting problem. When they realized that this lemma could crack the longstanding minimal model problem wide open, their discovery came "surprisingly quick" — in just a few years, Hacon said. Interestingly, the new proof doesn't reveal how many types of solutions to a polynomial of given dimension exist or even what those solutions might look like; it only reveals that the number of possible shapes the solution takes isn't infinite.

Right now, Hacon andMcKernan's proof has absolutely no practical application. But ultimately, it could provide a theoretical window into extra dimensions, Hacon said.

"There's this string theory that suggests there should be an extra sixth dimension of the universe that we can't perceive," Hacon told Live Science. So one question researchers have asked is, "How may possible shapes can these extra six dimensions have and how do those shapes affect the universe we see?" (The newest proof only applies to shapes with holes, while popular string theories imagine rolled-up dimensions with no holes, but future work could wind up being more directly applicable, Hacon said.)

How exactly do you visualize a six-dimensional solution in a 3D world?

"You cheat," Hacon said. "You've seen abstract paintings, Picasso and whatnot. The drawing is nothing like a real person but nevertheless you can recognize the main features and it does convey something to you."

In the same way, a six-dimensional space can't be truly depicted on a 2D piece of paper, but its essence can be captured using mathematical tools, Hacon said.

Editor's Note: This article was updated to correct James McKernan's field of study. He's a mathematician, not a physicist.