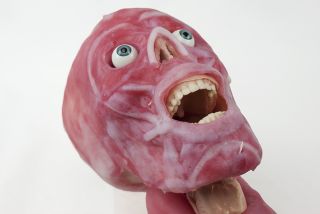 Medical schools have historically used human cadavers to train students in anatomy and medical procedures, a tradition that dates back hundreds of years. However, a unique type of medical model provides a remarkably human alternative to working with preserved corpses.

SynDaver synthetic humans are anatomically accurate medical models fabricated by the company SynDaver Labs. All of the body's muscles, organs and systems are meticulously represented, and unlike traditional models made of rubbery silicon or rigid plastic, SynDavers' are moist and pliable, and they closely resemble living tissue.

One type of these human models, built to train surgeons and first responders, even mimics what happens in the body during surgery or trauma, presenting the biological functions in a living person in distress, such as fluctuating respiration, blood pressure and heartbeat, according to the SynDaver website. [In Photos: Explore a Biodigital Human Body]

"The patient simulator that we have actually replicates the condition of a real patient — right down to, basically, bleeding to death," Kevin King, SynDaver's vice president for global marketing, told Live Science.

"It mimics exactly the physiology you and I would have, if we were to sustain the same injury," King said. "The heart rate would speed up, the blood pressure would drop, respiration would speed up. Our model is able to replicate all of those things."

These simulators, which can cost as much as $100,000, not only include organs and tissues that feel real, they also contain dynamic internal systems that interact with software. Using a tablet controller, instructors can program elements in their "patient" such as heart rate, respiratory rate and blood pressure, while a blood-like liquid drawn from refillable reservoirs circulates through the synthetic body and spills from its "wounds," providing a valuable learning environment for surgeons, King said.

"Throughout most of their training, most students would never have the opportunity to hold a human heart in their hand," King told Live Science. "Ours mimics all those properties, and it actually pumps, so they can see what a living heart would do."

Other SynDavers that are merely realistic anatomical models without moving parts come with a price starting at $60,000, and they have the same remarkably lifelike feel to their tissues, which are made from materials that mimic the tactile sensation, elasticity and physiological properties of human soft tissue, King said.

In fact, the television show "MythBusters," which recently returned to the Science Channel, used SynDavers as stand-ins to address the damage that could be done to the human body by some of the show's myth-busting scenarios, MythBusters' hosts Jon Lung and Brian Louden recently told Live Science.

"It is probably one of the most interesting tools we have in our arsenal," Lung said.

"You would really have to use a human cadaver to do the tests that we do as accurately as we do them — and you just can't do that," he said.

What makes SynDavers' faux-organic organs, skin and muscles so lifelike? Moisture is a key component of the polymer's secret recipe — "'Water, salt and fibers' is what I'm allowed to tell you," King said. [5 Amazing Technologies That Are Revolutionizing Biotech]

In recent years, SynDaver is just one of many technological advances in medicine that have improved the tools that doctors use for training, diagnosis and surgeries.

Magnetic resonance imaging — MRIs — can visualize structures as delicate as the brain's individual blood vessels, allowing experts to model them in 3D and pinpoint brain regions for repair. Surgeons can use targeted radiation beams to destroy tumors or lesions in the brain and in other parts of the body.

Researchers are also developing stretchy, wearable electronics that could one day serve as ultrathin "smart gloves," helping doctors and nurses to diagnose or treat patients with a single touch.

Sophisticated virtual reality (VR) and augmented reality (AR) surgery simulations — sometimes incorporated with 3D-printed organ models — are also proving to be valuable for doctors and medical students, enabling them to learn or practice tricky surgical techniques under realistic conditions that carry no risk to a patient, Live Science previously reported.

However, while being able to virtually "lift" a 3D image of a still-beating heart out of a patient sounds visually impressive, VR and AR are ultimately no match for a hands-on, visceral experience when it comes to treating or studying the human body, King told Live Science.

"I would much rather them put their hands inside the technology, feel the real weight of a heart, feel the beating of a heart as it exists in its native environment, not floating through space," he explained.