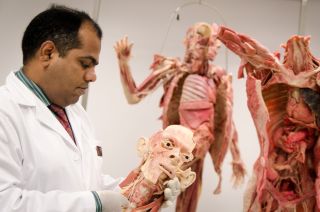 At a Singapore medical school, doctors-to-be are learning anatomy on human bodies preserved in plastic.

The bodies, which were donated to science, have undergone a process called plastination, which replaces the fat and water in a cadaver with plastic and other polymers. The treatment maintains the tissues' structural properties and prevents decay.

The medical school at Nanyang Technological University (NTU) will be using plastinated bodies in its first class in August. The school has ordered two whole bodies from Germany, as well as body parts, including hearts, lungs, brains, limbs and torsos.

Plastinated specimens have several advantages: They are of good quality, sturdy and preserve intricate details of the muscles, arteries, veins and nerves. These structures start to deteriorate in traditional cadavers.

"These highly detailed, plastinated human specimens are very durable, and can be repeatedly handled by students without deterioration, and it can be stored just like any inert object," anatomy professor Dinesh Kumar Srinivasan of NTU's medical school said in a statement.

The plastinated bodies and body parts will replace traditionally embalmed cadavers, which are in short supply in Singapore, where people may fear that their body will be mishandled after death.