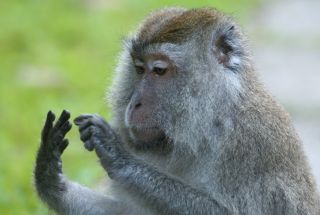 Some monkeys have shown the ability to count objects.
(Image: © Michael Woodruff/Shutterstock)

The ability to solve complex math problems is one thing that sets humans apart from the rest of the animal kingdom. Despite this fact, some animals do seem to have at least one basic mathematical ability — they can, in a sense, count.

In the early 1900s, the horse Clever Hans drew worldwide attention in Berlin when his trainer demonstrated that the ungulate could count (and solve math problems), tapping his hooves to indicate a number or correct option among multiple choices. Researchers later discovered that Clever Hans didn’t actually have mathematical skills, but the horse did demonstrate impressive observation skills. That is, he was unable to answer questions that his questioners also couldn't answer because Clever Hans was actually reading minute facial and body cues to determine the correct responses.

While Clever Hans failed his math quiz a century ago, studies in more recent decades have shown that numerous species do actually have a "number sense," or the ability to discriminate between different quantities of objects.

Perhaps unsurprisingly, after humans, non-human primates appear to have the most advanced numerical skills. In the late 1980s, researchers showed that chimpanzees could add up the number of chocolates in two food bowls (up to five pieces of chocolate in each bowl), compare it with the sum of two other food bowls, and correctly choose the larger of the two sums 90 percent of the time.

Lions also appear to have a number sense related to sound. Past research showed that lion prides would choose to approach or retreat from sounds of roaring intruders (played from a loudspeaker) depending on how many intruders appeared to be roaring and how many members were in their own group.

Some other mammals, including wolves and black bears, have also demonstrated the ability to discriminate between quantities — and so have animals from various other animal classes.

Bees are often lauded for their remarkable cognition, including their decision-making skills and social learning capabilities. But scientists have long known that the insects could count — at least to 4. Researchers in the 1990s showed that honey bees know how far they've traveled from their hive by counting the number of landmarks (up to 4) along the way and would get confused if researchers altered the number of landmarks between trial runs. More recent research showed honey bees could discriminate between different numbers of dots (again up to 4).

Unlike bees, fish aren't often known for their intelligence (though one fish, at least, has been caught red-finned using a rock "tool" to crack open a clam). Yet, these animals also have a number sense: Studies of guppies show the fish will preferentially choose to join shoals that have more fish (and are therefore safer).

Some research suggests that number sense may be something that certain animals are born with. In 2015, scientists found that baby chicks as young as 3 days old can identify smaller and larger quantities and may even think of numbers on a "number line" running from left to right, similar to humans. Other scientists, however, have pointed out chicks often show a bias for turning left or right, potentially skewing the data.

Whatever the case, our number sense is not unique in the animal kingdom. In fact, it may not be something that's reserved to just animals: Venus flytraps can also "count."