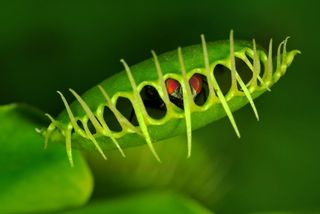 Unlike proactive predators in the animal kingdom, carnivorous plants like the Venus flytrap (Dionaea muscipula) must wait for their insect prey to literally step inside their "jaws" before they can catch the victims. But these plants don't instantly snap at the first tentative tap of a potential meal in their maws; instead, the plants count touches from their hapless prey to tailor a predatory response, an international team of scientists found.

The first tap from an insect tells a Venus flytrap, "Pay attention, but don't respond just yet," the new study said. A second tap means, "Probably food," triggering the trap to close, and three more taps from a trapped insect signal, "Start digesting!"

Venus flytraps, native to North Carolina and South Carolina in the United States, are small, flowering plants that grow in damp, sandy soil; they supplement the lack of nutrients in that soil with a diet of insects and arachnids. The plants' carnivorous behavior even caught the attention of noted naturalist Charles Darwin, who wrote admiringly about them in his 1875 publication "Insectivorous Plants," calling the Venus flytrap "one of the most wonderful [plants] in the world." [Venus Flytrap's Countdown to Bug-Consumption Caught on Video]

Darwin was fascinated by these plants that "ate" like animals did, stating in his autobiography, "The fact that a plant should secrete, when properly excited, a fluid containing an acid and ferment, closely analogous to the digestive fluid of an animal, was certainly a remarkable discovery."

The Venus flytrap's capture organ, described by the researchers of the new study as a "green stomach," extends from the ends of the plant's leaves, and its two-hinged, crescent-shaped lobes are fringed with bristles that lock together when the trap shuts. The trap's inner surface sprouts hairlike structures known as trichomes, sensitive strands that react to a visiting insect's touch. And two taps are all it takes to trigger a lethal outcome. Once the prey is caught, the flytrap's digestive juices go to work, breaking down and absorbing the nutrients and reducing the insect to an empty husk.

Prior observations of flytrap behavior noted that the plants snapped closed after two touches to their trichomes, the scientists reported. But the new study took a closer look at how the Venus flytrap might use touch to identify a visiting insect as food, and to capture and consume it, they said.

To translate these signals, researchers wired up Venus flytraps to record electrical impulses emitted by the plants; then, the scientists stimulated the flytraps manually by simulating prey behavior, while monitoring the plants' responses.

The investigators found that the trigger hairs were linked to two important areas in the plant: motor tissue, which mechanically closed the trap, and the endocrine system, which digests the nutrient-rich prey. After the two touches had sprung the trap, the insect's frantic struggles brushed it up against the hairs again and again. Like the repeated ringing of a "Come and get it!" dinner bell, these later touches further stimulated the plant, prompting the release of digestive juices, the researchers observed.

The scientists also noted that during digestion, gland cells in the flytraps enabled the plants to absorb and store large amounts of sodium from the decomposing insects. The researchers said they were not certain how the plants were using the element, but suggested that it might be stashed in shoot tissues, helping to preserve the proper balance of water in the plant's cells.

The findings were published online Jan. 21 in the journal Current Biology.