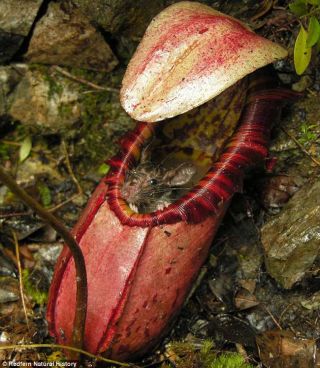 A giant plant that can gobble up bugs and even rodents has been discovered in Southeast Asia.

The carnivorous plant (nepenthes attenboroughii) was found by researchers atop Mt. Victoria, a remote mountain in Palawan, Philippines. The research team, led by Stewart McPherson of Red Fern Natural History Productions, had learned of the plant in 2000 after a group of Christian missionaries stumbled upon it while trekking up a remote mountain and reported it to a local newspaper.

The discovery, announced last week, was detailed in the Botanical Journal of the Linnean Society.

The pitcher plant is the world's second largest and can grow to more than 4 feet tall, with a pitcher-shaped structure filled with liquid. The plant secretes nectar around its mouth to lure rats, insects and other prey into its trap. Once an animal has fallen in, enzymes and acids in the fluid break down the carcass of the drowned victim.

"All carnivorous plants have evolved to catch insects but the biggest ones, such as this one, can eat rats and frogs," McPherson told LiveScience. "It's truly remarkable that a plant this big has been undiscovered for so long."

The world's largest pitcher plant (nepenthes rajah) was discovered in 1858 by British naturalist Hugh Low in Borneo. The plant's rat-eating habit was confirmed four years later when his colleague Spenser St. John found a drowned rat inside one of the specimens.

Though some have approached McPherson to ask about the likelihood of cultivating the monster plants as mouse traps for rodent-infested regions like New York City, the botanist (who also happens to specialize in pitcher plants) says he finds the idea "a bit far-fetched."

"Mice and rats are attracted to the sweet nectar of the plant, but it only catches them occasionally," says McPherson. "It just isn't practical. There will be too many mice for the plant to catch anyways."