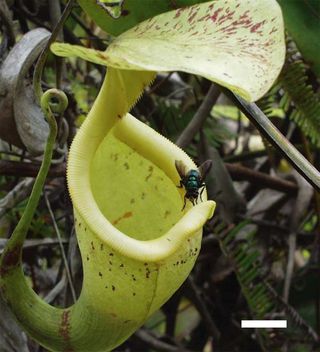 Carnivorous plants trap and digest bugs and other small critters. This prey helps supplement the meager diet the plants receive from the nutrient-poor soils in which they are found.

Aside from the iconic Venus flytrap, many other kinds of carnivorous plants exist. These include the pitcher plants of the Asian tropics, known as Nepenthes, which resemble jugs brimming with nectar—or perhaps more accurately, mouths slavering with drool.

Until now, the key way by which victims lured into the pitchers got caught was considered to be the slippery inner surfaces of the plants. The secretions within the pitchers were thought only to act as saliva, digesting prey.

High-speed videos revealed that flies trying to escape the saliva quickly became unable to move, apparently captured by sticky filaments emerging from the lethal fluid. Clingy strands are typical of similarly elastic fluids, such as mucus.

The elastic consistency of the plant fluid also makes it resemble quicksand. The quicker insects within the fluid move, the more trapped they become, Forterre explained.

"The only chance for insects to escape the fluid would be to move slowly," Gaume added. "But once fallen in the pitchers, insects most often panic and exhibit quick movements."

Gaume and Forterre found the drool worked even when it was diluted more than 90 percent with water. This property is likely critical given the tropical environs these plants are found, which are often subject to heavy rainfall.

The researchers suggest these findings could apply to other Nepenthes plants, which counts for more than 86 species. Better understanding how their saliva works—and the molecules responsible for its behavior—could shed light on similarly elastic fluids, such as mucus and blood. This in turn could shed light on a wide range of phenomena, such as the crawling of snails and mollusks "or motion of spermatozoa in the female reproductive tract," Forterre said.

Intriguingly, whole communities often live inside these pitchers without falling into the saliva, such as mosquitoes and midge larvae that feed on debris and speed up breakdown of prey. One species of crab spider can even enter and escape from the pitcher fluid without any difficulty. "It would be useful to carry out more fieldwork and lab observations to study how insects that live in this fluid manage," Gaume said.

Gaume and Forterre detailed their findings online Nov. 20 in the journal PLoS ONE.