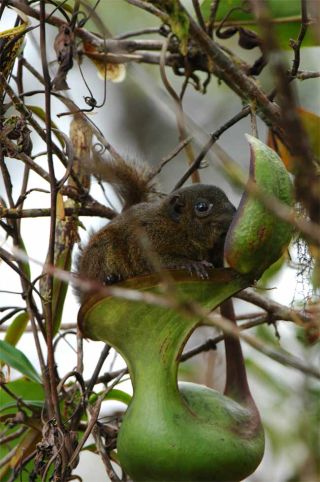 Mountain tree shrews (Tupaia montana), like this one, feed on the nectar coating the undersides of pitcher plant leaves. Conveniently, they can also defecate into the pitcher, leaving nitrogen-rich feces for the plant to consume.
(Image: © Ch’ien Lee)

The jug-shaped plants make out just fine, too: They use the shrew's feces as a much-needed nitrogen source.

Most pitcher plants are carnivorous, trapping ants and other insects that slip down the sides of the pitcher into a pool of digestive enzymes. The new finding, published online June 10 in the journal Biology Letters, reveals at least one type of pitcher plant "feeds on" the poop from tree shrews in lieu of insects.

{{ video="LS_090622_Tupai" title="Tree Shrew Lavatory" caption="A tree shrew licks nectar from the underside of the pitcher plant's lid, and if necessary defecates, before scrambling away." }}

Team member Ulrike Bauer of the University of Cambridge in England set up video cameras that recorded activities around several Nepenthes lowii pitcher plants in a mountainous cloud forest on the island of Borneo in Southeast Asia.

Sure enough, video observations showed mountain tree shrews (Tupaia montana) jumping onto the plants, licking nectar from the underside of the leaf that sits atop each plant's opening and defecating into the pot. The video even showed that tree shrews mark the plants with their scent by rubbing their genitals onto the lid before scrambling away. The tree shrews often visit the same "circuit" of pitchers when feeding.

Closer examination of the plants showed they have adapted to make for perfect powder rooms.

"Lowii has modified their aerial pitcher to be a toilet," Moran said. For instance, the rim of the pitcher is not slippery like it is in the insect-trapping varieties such as the ground-lying, terrestrial N. lowii pitchers. That way, tree shrews stay safe from a spill while eating and pooping.

"It's very tough, there's lots of reinforcement, because [the pitcher is] hanging off the end of a leaf and it has to be able to support a tree shrew," Moran told LiveScience, adding the animals can weigh less than half a pound (150 grams).

And there's no way for the animals to miss the hole. The shape of the pitcher opening and orientation of the leaf lid that's coated with nectar ensure a tree shrew will position its hindquarters over the orifice while feeding.

"[The tree shrew] licks the lid, and if it needs to take a bathroom break then it's positioned perfectly for that," Moran said. "Plus it's a funnel so the next time it rains the feces will be washed into the pitcher."

The adaptations for feces-feeding make sense in this mountainous environment, where insect prey is scarce, Moran said.

Both the ground and aerial types of this pitcher plant ultimately suck out the nitrogen from their meals, using it to grow. But while the ground plants feed on the crumbs, the aerials feed to their heart's content as tree shrews (and their feces) are plentiful at such high altitudes in Borneo.

In fact, the new research showed the aerial pitchers get between 57 percent and 100 percent of their nitrogen from feces.

This partnership is likely an old one. "The fact that the aerial pitchers are so tailored to the shape and activities of the tree shrew suggests this has been going on for a long time," Moran said.