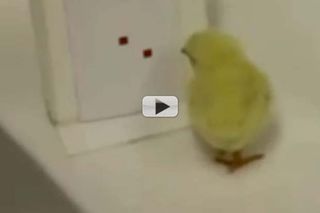 Chicks ‘Count’ Up Left To Right - But Why? | Video
(Image: © Rosa Rugani, University of Padova)

It's not just humans who can count; chicks seem to have a number sense, too, new research suggests.

Scientists found that chicks seem to count upwards moving from left to right — they put smaller numbers on the left and larger numbers on the right, the same mental representation of the number line that humans use.

The findings suggest that animals don't have to have words for numbers to have a sense of their relative sizes.

"Our results suggest a rethinking of the relationship between numerical abilities and verbal language, providing further evidence that language and culture are not necessary for the development of a mathematical cognition," said study lead author Rosa Rugani, a psychologist at the University of Padova in Italy. [5 Seriously Mind-Boggling Math Facts]

Most people learned about number lines in math class, with smaller numbers coming from the left and increasing as they go right. And that same way of thinking about numbers seems to be embedded in people's mental representations of numbers, according to the book "The Number Sense: How the Mind Creates Mathematics" (Oxford University Press, 2011).

But exactly why wasn't clear: Is it an artifact of some long-lost accident of history, when someone decided to put the small numbers on the left? Or is it a more fundamental aspect of how the brain processes numbers?

To help answer those questions, Rugani and her colleagues trained 3-day-old chicks to travel around a screen panel with five dots on it to get to a tasty food treat behind it. This made the five-dot panel an anchor number that the chicks could compare the other numbers to.

"A number is not either small or large in an absolute sense, but rather it is smaller or larger with respect to another number," Rugani told Live Science.

After the chicks learned that the five-dot panel meant food, the researchers removed that panel, and then placed the chicks in front of two panels, one off to the left and the other off to the right, that each had two dots.

In a second experiment, the researchers repeated the whole process, but started with a panel that had  20 dots (instead of five). They then added two other panels that had either eight or 32 dots.

Sure enough, the baby chicks tended to go to the left when the screens had just eight dots, and to the right when they had 32 dots, according to the findings published today (Jan. 29) in the journal Science.

"They associate small numbers with the left space and larger number with the right space, and this resembles the humans' behavior in responding to numbers," Rugani said.

The findings suggest the chicks were conceptualizing the number line with smaller numbers on the left, just like humans, the researchers said. That, in turn, may suggest the mental representation of numbers emerged many millions of years ago, in an organism that was a common ancestor to both birds and humans.

"I would not at all be surprised that the number spatial mapping is also found in other animals, and in newborn infants," Rugani said.

As a follow-up, the team is hoping to look at other animals to see where in the brain this number sense originates.

A 2013 study that was also published in Science found that humans think about mapping numbers in the right parietal cortex, but it remains to be seen whether similar structures play a role in animals' number sense, Rugani said.