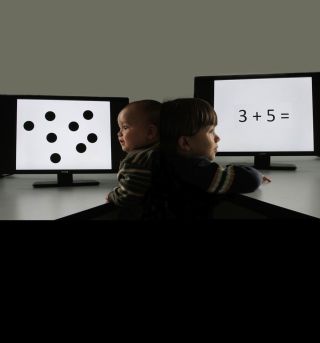 Six-month-old infants’ intuitive number sense predicts their performance on math tests at 3.5 years of age. This link cannot be explained by differences in general intelligence and suggests that infants’ number sense is an important building block for later mathematical abilities.
(Image: © Melissa Libertus)

A baby's sense of numbers at the age of 6 months predicts how good that child will be at math at the age of 3, new research finds.

In the study, in which researchers looked at infants' "primitive number sense," or how well they can differentiate between groups of different numbers of items, suggests this skill is a building block for future math learning.

"It may explain some of the differences in how easy children find it to learn," said study researcher Elizabeth Brannon, a professor of psychology and neuroscience at Duke University in North Carolina.

From as early as the first two days of life, newborns have an approximate sense of numbers, researchers have found. If shown a grid of eight dots repeatedly, for example, babies will look longer than when they're suddenly shown a grid of 16 dots, even if the grid is otherwise identical. Because babies can't talk, infant cognition researchers rely on the fact that infants look at new, unfamiliar objects longer than old ones to determine what babies can perceive. If they looked the same amount of time at a 16-dot grid as a series of eight-dot grids, it would suggest the infants couldn't tell the difference between the two. [Incredible! 9 Brainy Baby Abilities]

Brannon and her colleagues developed a type of baby math test that allows researchers to "score" individual infants on their primitive number sense. In this test, the baby is shown two screens simultaneously. A series of black-and-white patterns made of dots flash across both screens. The difference is that one screen always shows patterns made of the same number of dots — the size of the dots and the arrangement are all that change. On the other side, the number of dots making up the patterns changes, too.

A baby with a strong number sense will notice the number of dots on one screen is changing and will look at that screen longer.

Using this method, Brannon and her colleagues tested the number sense of 48 6-month-old babies. They then followed up with the same children at 3.5 years of age. This time, the kids took a general intelligence test, a standardized math test and a test on how well they understood the words for numbers. The 3-year-olds also completed a grown-up version of the number sense test they'd taken as infants, this time pointing out which of two dot patterns contained more dots.

The result? The kids with a stronger primitive number sense as babies did better at all three math tests as 3-year-olds. These advanced math abilities weren't related to stronger general intelligence, suggesting early math sense is specific to computational abilities, Brannon told LiveScience.

Many factors influence how well a child will grasp math, Brannon said. Experience, education and motivation all matter greatly. The researchers "are not in any way, shape or form" claiming that innate ability trumps the importance of exposure to numbers, Brannon said. But it does seem that primitive number sense matters to some extent.

The researchers continue to examine the variables that make math a breeze for some kids and a struggle for others. They hope the new findings, published this week in the journal Proceedings of the National Academy of Sciences, will ultimately help improve math education.

"We're asking 'Can you train the approximate number system, or primitive number sense; can you improve it and will this actually have an effect on symbolic mathematics?'" Brannon said.