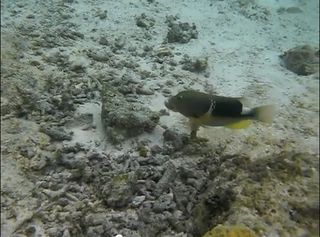 An orange-dotted tuskfish picks up a clam to toss it against a rock in this video still.
(Image: © Giacomo Bernardi, UCSC)

A fish using tools to crack open a stubborn clam shell has been caught on video for the first time.

The clip, shot in 2009 off the Pacific island of Palau, shows an orange-dotted tuskfish (Choerodon anchoago) digging a clam out of the ocean floor and carrying the clam in its mouth to a rock. Next, the fish repeatedly tosses the clam against the rock to crush it. [See the video of the tool-using fish]

Since then, the video was analyzed and was just detailed online Sept. 20, 2011, in the journal Coral Reefs.

"The animal excavates sand to get the shell out, then swims for a long time to find an appropriate area where it can crack the shell," videographer Giacomo Bernardi, an evolutionary biologist at the University of California, Santa Cruz, said in a statement. "It requires a lot of forward thinking, because there are a number of steps involved. For a fish, it's a pretty big deal."

Tool use was once thought to be unique to humans, but lots of animals use tools — and not just primates. Crows, for example can figure out how to drop stones into a water-filled cup to bring a tasty floating worm within reach. Some types of octopus pick up coconut shells and use them as a sort of mobile shelter.

The clam-cracking tuskfish isn't the first fish to be observed using tools. The tuskfish is a kind of reef fish known as wrasse, and these species have been seen using rocks as anvils to crush shellfish. But this is the first time the behavior has been caught on video.

"We don't spend that much time underwater observing fishes," Bernardi said. "It may be that all wrasses do this. It happens really quickly, so it would be easy to miss."