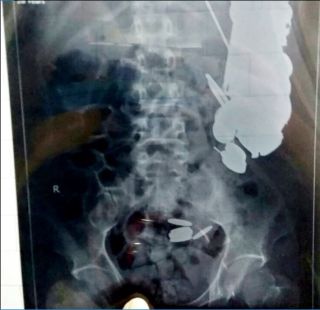 An image of coins and nails seen inside a man's gastrointestinal tract.
(Image: © SWNS)

Doctors in India were shocked to find that a patient with stomach pain had swallowed hundreds of coins and nails, according to news reports.

The 35-year-old patient was recently admitted to the hospital with abdominal pain, and doctors initially thought he had food poisoning, according to the Independent.

But an endoscopy exam — which uses a flexible tube to view the digestive tract — revealed numerous metal objects. The doctors performed surgery, and eventually removed 263 coins, 100 nails, dozens of shaving blades and shards of glass, and a 6-inch piece of rusted iron shackle, the Independent said. In total, the collection of foreign objects removed from the patient weighed about 15 pounds (7 kilograms). [7 Weird Things People Have Swallowed]

"We were shocked to discover that [there were] coins, nails and nut-bolts in his stomach," Dr. Priyank Sharma, of Sanjay Gandhi Hospital in Madhya Pradesh, India, who treated the patient, was quoted as saying. This is the first time the doctors had seen such a case in their careers, Sharma said.

The patient, Maksud Khan, is thought to have mental health problems, and didn't tell his friends or family about his strange eating behavior.

The new case is similar to one reported last month, in which a man in France was found to have more than 100 pieces of metal in his stomach, including coins and nails. In that case, the patient was diagnosed with psychosis, which means a person experiences a loss of touch with reality.

Another similar case occurred in 2016, when a 42-year-old man in India swallowed 40 knives. That patient said he felt "addicted" to the behavior, and he may have had pica, an eating disorder in which people eat nonfood materials such as metal for at least one month.