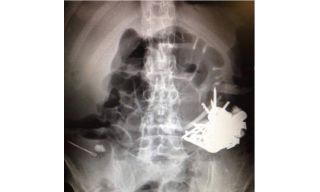 An X-ray of the man's abdomen. The large white mass is the metal bezoar.
(Image: © The BMJ)

Surgeons removed more than 100 pieces of metal of various shapes and sizes from the stomach of a man in France, according to a new report of the man's case.

The 52-year-old had psychosis — meaning he had lost touch with reality — and despite receiving treatment for the condition, he had a tendency to intentionally swallow metal items. These items ranged from nails, knives and screws to spoon handles, nuts and coins, according to the case report, published Sept. 27 in the journal BMJ Case Reports.

Metal bezoars are one of the rarest forms of bezoar, according to the case report. Other types of bezoars include those formed by clumps of undigested milk (seen in infants), hair (in people who ingest hair, a condition known as trichophagia), plant material (from fruit and vegetable fibers) and pills.

In the man's case, he went to the emergency room five times over a five-year period, complaining of stomach pain, nausea and vomiting up blood. In four of these instances, doctors had to operate to remove a massive metal bezoar from his stomach. Surgery was necessary because removing the metals by endoscopy — a procedure in which a thin, flexible tube is inserted into the stomach from the mouth so that doctors can retrieve the swallowed object — didn't work, according to the case report.

It was surprising that the man needed surgery on four separate occasions to remove these objects, said Dr. Steven Moss, a gastroenterologist and professor of medicine at Warren Alpert School of Medicine of Brown University. Usually, when people swallow sharp metal objects, they can often be taken out safely by endoscopy, Moss said.

Moss was not involved in this man's case, but he has treated people who have swallowed massive amounts of metal, and was the co-author of a 2010 paper in the journal Clinical Gastroenterology and Hepatology on people who intentionally swallow objects not meant to be swallowed.

Moss said he wondered if some of the man's operations could have been prevented, because surgery to remove these items is not normally the treatment of choice.

But there was one instance in the French man's case where surgery was necessary, Moss said.

During the man's most recent visit to the emergency room, in December 2016, scans of the man's abdomen revealed that the metal objects had made a hole in his stomach, according to the report.

This means that, essentially, the stomach has burst, and surgery is the only option to retrieve the swallowed objects, Moss told Live Science.

It may seem unusual that sharp items, such as a swallowed razor blade, could come into contact with the stomach and not cause holes all the time, Moss said. But the stomach has thick walls, and when cuts or scratches happen, the body can be amazingly resilient and heal, he said.

Although the sheer quantity of metal swallowed by the man in this case was "impressive" and "more than normal," Moss said he has retrieved metal objects ranging from bed springs and batteries to bits of CDs and hundreds of coins. [27 Oddest Medical Cases]

Another intriguing question is why people would deliberately and repeatedly swallow such large quantities of metals or other objects in the first place.

"No one really quite understands it," Moss said. This behavior is more commonly seen in people with psychiatric conditions and in prisoners who are seeking medical attention, he said.

There are two groups of psychiatric patients who may exhibit this strange behavior.

Both groups can be very resistant to psychiatric treatment, Moss said. People who repeatedly swallow unusual objects will often do it again, even if these behaviors cause them pain and medical problems, and even if they are treated with the appropriate medications, he said.