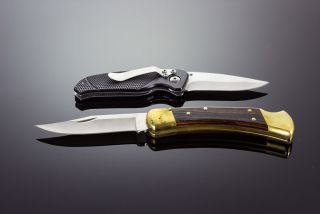 A man's craving for metal that led him to swallow 40 knives may sound bizarre, but such strange cravings can be symptoms of an eating disorder in which people ingest anything from dirt to talcum powder.

The 42-year-old man in India said he had consumed the knives over a 2-month period, according to CNN. Some of the knives were folded up when the man ingested them, but some were unfolded, and extended to about 7 inches (18 centimeters) long. The man required a 5-hour operation to remove the knives. Because some of the knives were open, the man was bleeding profusely and couldn't have survived for much longer before his operation, according to the Washington Post. But now he should be able to leave the hospital in a few days.

The man told CNN that he wasn't sure why he swallowed the knives, but that he liked the way they tasted. "I just enjoyed its taste, and I was addicted ... how people get addicted to alcohol and other things, my situation was similar," the man was quoted as saying.  [7 Weird Things People Have Swallowed]

People who eat nonfood materials for at least one month may have an eating disorder called pica, according to the National Institutes of Health (NIH). People with the condition have been known to consume a variety of substances, including dirt, clay, hair, paint, sand, soap, metal and paper.

Up to a third of young children may show symptoms of pica at some point, the NIH said. Pica is also more common in pregnant women, particularly those from certain cultures. One study found that 44 percent of Mexican-born women living in Southern and Baja California had symptoms of pica during pregnancy.

Exactly what causes pica in a given case is not always known, but the disorder may be a sign of a medical or psychological problem, said Dr. Gilda Moreno, a clinical psychologist at Nicklaus Children's Hospital in Miami, who was not involved with the Indian man's case.

For instance, a lack of certain minerals in the body, such as iron or zinc, may trigger pica in some people, Moreno said. In these cases, people could crave an unusual substance the way that thirsty people crave water, she said. That the Indian man said he liked the taste of metal, and even equated it with an addiction, "almost tells you that there must be some nutritional component to it," Moreno told Live Science.

Still, pica is also linked to a number of mental disorders, including autism, obsessive-compulsive disorder and schizophrenia, Moreno said. In cases of people with schizophrenia, the patients may consume nonfood substances because they are unaware of their surroundings, she said.

In 2011, researchers from the United Kingdom reported a case of a 19-year-old woman who had the mental health condition called borderline personality disorder. She swallowed a number of objects in order to deliberately harm herself, including knives, razors and 6-inch (15 cm) sewing pins.

People who have pica need to be assessed for medical problems that might result from their unusual eating patterns, including intestinal blockages, tears in the esophagus, infections and poisoning, Moreno said.

With various treatments, pica usually goes away over time, particularly if it's caused by a nutritional deficiency, Moreno said. But some people, particularly those with compulsions, might struggle with the disorder their whole lives, she said.