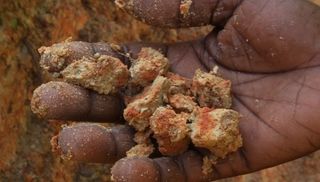 Women around the world have a craving for dirt during their pregnancies.
(Image: © Sera Young, Columbia University Press)

The number of people hospitalized with pica, the disorder in which people eat non-edible substances including dirt and chalk, has nearly doubled within a decade, a new study finds.

Between 1999 and 2009, yearly hospitalizations in the United States for this disorder increased 93 percent, from 964 to 1,862, said the report from the government's Agency for Healthcare Research and Quality.

Pica is most commonly found in children, pregnant women and people with autism and other developmental disabilities. In many cases, the disorder lasts several months and then disappears without treatment, according to the National Institutes of Health.

Little is known about what causes the disorder, and researchers said they can only speculate as to why pica hospitalizations have jumped. But it may be due, at least in part, to the recent rise in the number of diagnosed autism cases.

Between 2002 and 2006, the number of 8-year-olds diagnosed with autism rose 57 percent, according to the Centers for Disease Control and Prevention. Currently, one of every 110 children in the United States has an autism spectrum disorder. The increase in autism may be due to an increase in diagnosis, or it may be because more children are in fact developing autism.

Meanwhile, hospitalizations over the decade decreased 13 percent for anorexia, and 14 percent for bulimia, according to the study. Encinosa said these decreases were probably due to a big effort from the outpatient rehabilitation clinics to reduce hospital admissions and readmissions for eating disorders.

But with pica, "it's a different population," Encinosa said. "That population wasn’t really affected by the big movement from the eating disorder centers" to reduce hospitalizations, he said.

The new study includes data from about 90 percent of the hospital records in the country, Encinosa said.

Pass it on: Hospitalizations for pica have increased 93 percent over the last decade.