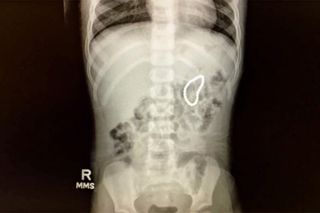 An X-ray showing the 28 Buckyballs linked into a circle in the toddler's gut.
(Image: © Fox)

A Colorado toddler narrowly avoided surgery after she swallowed 28 buckyball magnets, according to news reports.

An X-ray revealed that the small but strong magnets had linked up to form a circle in the 2-year-old's gut, and two of the magnets were pinching a bit of her bowel, Fox 31 Denver reported on Sept. 24.

The magnets "were pinching [her] bowel and causing the early formation of a hole within the bowel by the time we got in there," Dr. Robert Kramer, director of endoscopy at Children's Hospital Colorado, told Fox 31. Kramer removed the magnets using a special type of endoscopy, which involves inserting a long tube down through a person's mouth, into the gut. If the endoscopy hadn't worked, doctors would have needed to operate. [11 Weird Things People Have Swallowed]

Kramer told Fox 31 that the girl was lucky — in some cases, the magnets can cause holes, and doctors need to remove part of the intestine.

Buckyballs are BB-sized, superstrong magnets made of the rare earth metal neodymium. In 2013, the U.S. Consumer Product Safety Commission (CPSC) issued a recall on the magnets and also announced that it was illegal to sell them. The magnets can stick to one another through the walls of the stomach or the intestines, causing serious injuries, including holes, intestinal blockages, blood poisoning and death, according to the CPSC.

But in December 2016, an appeals court overturned the CPSC's decision, and retailers are now allowed to sell the magnets once again, according to Fox News.

"We are seeing these cases [of kids swallowing the magnets] come back again," Kramer said.

In the toddler's case, the girl's father had the magnets on his desk. He had stepped away to use the bathroom, and when he came back, he found the girl holding them. That worried him, as his daughter liked to put toys in her mouth, Fox 31 reported. This prompted the parents to take the girl for an X-ray, even though she hadn't shown any symptoms.

When someone swallows two or more magnets, it's an emergency, said Dr. Shifra Koyfman, a pediatric gastroenterologist at Nicklaus Children's Hospital in Miami. Koyfman was not involved in the Colorado toddler's case.

That's because the magnetic force between the objects pulls them together, and when that happens in the gut, it can pull together two parts of the digestive tract that shouldn't normally touch, and create holes, Koyfman told Live Science. For example, in one case that Koyfman worked on, X-rays showed magnets in the patient's stomach and large intestine, where they had drawn the two organs together, and surgery was needed. [9 Weird Ways Kids Can Get Hurt]

Buckyballs are "pretty dangerous," Koyfman added, because they're powerful magnets, as well as very small and easy for kids to swallow.

Ingesting magnets can lead to symptoms including belly pain and vomiting, Koyfman said, and if magnets cause a hole, a person may have blood in his or her vomit.

Koyfman said she tells parents to keep anything they don't want their kids to swallow locked up and put away. And "if kids swallow [magnets], bring them to the emergency room," she said.