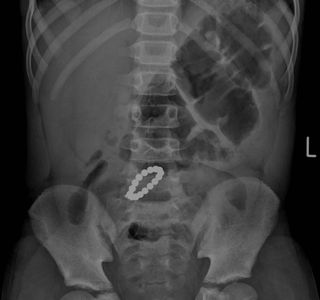 A 10-year-old boy who swallowed 16 tiny magnets developed serious injuries that required extensive surgery, according to a new report that highlights the life-threatening dangers of magnets in children's toys.

Doctors in the United Kingdom who treated the boy for a stomachache found the pain was caused by pieces of a Magnicube puzzle he had ingested. The ball-shaped magnets were attracted to each other through the walls of his bowels, and so they had pulled different parts of his intestines together, causing multiple holes in the intestinal walls, and tissue death in several regions.

These are serious injuries that could result in severe infection and potentially kill a person, according to the team that reported the boy's case.

"Magnets are not toys for children," said Dr. Richard Hesketh, a physician at West Middlesex University Hospital in London, who treated the boy.

"I think most parents, if they knew magnets were potentially that dangerous if ingested, they wouldn't be allowing their children to play with them," Hesketh told Live Science.

The doctors had to remove a 4-inch (10 centimeters) segment of the boy's bowel, and close four holes in his intestine wall with sutures. The child was in the hospital for two weeks, Hesketh and his colleagues wrote in their report, published in the journal BMJ Case Reports on Dec. 2.

Studies have found the rate of injuries involving magnet ingestion has increased dramatically over the past decade. Experts have also been warning that the smaller, more powerful magnets introduced to the market in the recent years could cause more severe injuries. Magnicubes, which are sets of tiny, high-powered magnets, were recalled in the United States in August after the U.S. Consumer Product Safety Commission received numerous reports of children with serious injuries after ingesting the ball magnets.

Still, many other toys with similarly tiny and powerful magnets are still around, and the warnings on their labels wouldn't necessarily stop the children from getting hold of them.

"Awareness is the main thing," Hesketh said. "I think people just aren't aware that something so seemingly harmless could actually be damaging. I think people are probably more aware that, for example, batteries contain chemicals that can damage the gut very substantially, but magnets seem very innocuous objects."

It might be difficult for both doctors and parents to figure out whether a child has ingested magnets, especially if the parents didn't see it happen, or the child doesn't remember it. Children may develop symptoms common to many ailments, such as abdominal pain, the researchers said. In the boy's case, the doctors first thought the child had a stomach flu, and only the next day when his symptoms worsened did they order an X-ray, and find the magnets. [Image: X-Ray of the magnets in the boy's intestines]

Hesketh said doctors and parents should keep magnet injuries on their radar.

"You need to bear in mind that children put all sorts of objects in their mouth, and doctors assessing nonspecific abdominal pain should always consider ingestion as a possible cause," Hesketh said.