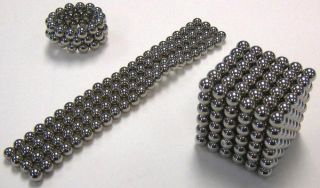 Injuries from swallowing magnets are a growing problem among children and could lead to potentially life-threatening complications, researchers say.

In a 2012 survey of pediatric gastroenterologists in North America, doctors reported treating 480 cases of magnet ingestion in kids during the past 10 years; about 42 percent of these cases occurred during the last 12 months.

And information from the Public Health Agency of Canada also suggests that the number of visits to emergency departments for magnet ingestion has increased significantly in that country over the past decade, according to researchers at The Hospital for Sick Children (SickKids) in Toronto.

The rise appears to be tied to an increase in the availability of powerful magnets called neodymium-iron-boron magnets, which are 10 to 20 times stronger than older magnets, called ferrite magnets.

In the past, children who swallowed ferrite magnets often passed the foreign objects without being hurt. However, kids who swallow the newer, more powerful magnets run the risk of suffering a more severe injury because the magnets can adhere to each other as they travel through the bowel, the researchers said.

Swallowing a single neodymium magnet usually doesn't cause harm, but "multiple magnets, especially when swallowed at different times, can attract each other through loops of the gastrointestinal tract," said study researcher Dr. Daniel Rosenfield, of SickKids. This attraction can tear a hole in the bowel, Rosenfield said.

In addition to reviewing evidence on the increase in magnet injuries, Rosenfield and colleagues also described the case of a 3-year- old child at their hospital who swallowed three small, spherical neodymium magnets. Because the child initially appeared fine and was not experiencing pain, he was sent home. His parents were told to watch for passage of the magnets in his stool.

However, two days later, the boy still hadn't passed the magnets. During surgery, the surgeon discovered them sticking together through loops of the lower intestine, the researchers said.

High-powered ball magnets — which are marketed to adults as desk toys — have also been a source of injuries to children in the past. Last year, the U.S. Consumer Product Safety Commission asked the manufacturers of these products, including the maker of the desk toy Buckyballs, to stop selling the products as they posed a risk of injury to children and teens. Buckyballs were discontinued last October.

Because warning labels have been insufficient at preventing injuries, doctors should discuss the risk of magnet injuries with parents of young children, the researchers said.

The study is published today (March 11) in the Canadian Medical Association Journal.

Pass it on: Powerful magnets pose risks for children if swallowed.