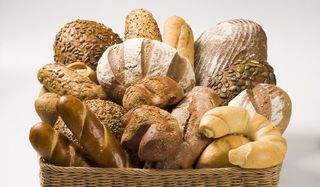 Gluten has been implicated in a number of symptoms related to celiac disease that go beyond the digestive system, including rashes, anemia and headaches. But according to a recent case report, the wheat protein played a role in one woman's severe psychosis.

The 37-year-old woman, whose case was described in the report, was studying for her Ph.D. when she started having delusions. Her symptoms began with a belief that people were talking about her as part of a conspiracy in which friends, family members and strangers were acting out scenes for her in a "game," the doctors who treated the woman wrote in their report, published May 12 in The New England Journal of Medicine.

After making threats against her family, the patient was admitted to a psychiatric hospital and was diagnosed with a psychotic disorder, the doctors wrote. She was prescribed anti-psychotic medications to help control her symptoms, but they did not work very well, according to the report.  [Here's a Giant List of the Strangest Medical Cases We've Covered]

During the woman's stay at the psychiatric hospital and at follow-up appointments after she was released, doctors noticed that she had several vitamin and mineral deficiencies, had lost a lot of weight and also had thyroid problems, according to the report.

These symptoms led doctors to suspect that the woman had celiac disease, said Dr. Alessio Fasano, director of the Center for Celiac Research and Treatment at Massachusetts General Hospital in Boston and one of the doctors who treated the woman. It was at that point that the doctors who wrote the case report got involved, he said.

The doctors at Massachusetts General Hospital confirmed that the woman had celiac disease, according to the report. However, her delusions led her to believe that the doctors were being "deceitful," and she refused to follow a gluten-free diet, they wrote.

The woman lost her job, became homeless and attempted suicide, the doctors wrote. Eventually, she was rehospitalized at a psychiatric facility, where she was successfully placed on a gluten-free diet, they wrote.

When the woman was on a gluten-free diet, her symptoms improved, Fasano said. She was once again functional and aware of what gluten was doing to her, he said. She knew that being exposed to gluten caused her to lose control of her life, and she wanted people to understand that the gluten was causing this bizarre behavior, he added.

The differences between how the woman behaved on a gluten-free diet and after being exposed to gluten was like "Dr. Jekyll and Mr. Hyde," Fasano said. "This was a bright young lady on her way to [getting] a Ph.D., and all of sudden," something changed and she would do things that were harmful to herself and people around her, he said.

During the time the doctors were working with the woman, she inadvertently consumed gluten on several occasions, Fasano said. When this would happen, she would become completely lost, he said. But when she was gluten-free, she was well aware that she needed to avoid gluten because "she [didn't] want to go to 'that place,'" Fasano said.

When Fasano last saw the woman, around January 2016, he reported that she was doing very well. She was completely avoiding gluten, and her symptoms had gone away, he said. In fact, the woman was planning to participate in an experiment with her doctors so that they could study what happened to her when she consumed gluten, he said.

The plan was to do the experiment in a very controlled environment so that the patient would not do anything harmful, he said. The experiment would give the doctors the opportunity to study the inflammatory process that potentially caused these symptoms. They also planned to do some brain scans, he said.

But before the doctors could do the experiment, the woman accidentally ate some gluten, Fasano said. Her delusions returned, and she was put in jail after trying to kill her parents, he said.

The mechanisms linking celiac disease to problems with the brain and nervous system aren't entirely clear, in part because it's very difficult to study such effects in humans, Fasano told Live Science. [Celiac Disease: Symptoms & Treatment]

But scientists do have a general sense of what's going on, he said.

Fasano likened the effects to a battle waged in the intestines: When someone has celiac disease, the immune system views gluten as the enemy, and deploys weapons to fight it, he said. Inflammation can be thought of as the collateral damage of the fight, he said. When the battle takes place in the intestine, people end up with inflammation there, he added.

But sometimes, the immune cells that wage war against gluten in the gut are able to leave the battlefield and go elsewhere. If those immune cells go to the brain, the same collateral damage — inflammation — can occur there, Fasano said. And depending on factors such as the location of the inflammation and the amount of time it has been there, the consequences can vary, he said.

Indeed, celiac disease can manifest itself in many different ways in the brain and nervous system, Fasano said. Complications can range from mild problems, such as short-term memory loss, to severe consequences, such as seizures, he said. But this woman's case was one-of-a-kind, he added.

The psychosis that the woman experienced was an extreme condition and very unique, Fasano said.