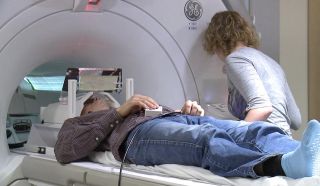 Researchers are using fMRI (functional magnetic resonance imaging) scans to watch how blood flows through active areas of the brain in real time. The scans can be used to produce "maps" of activity during a brain's thought processes, with the maps changing based on what a person is thinking. Globally, researchers run more than 2,000 fMRI studies every year, but currently, there is limited infrastructure for sharing results.

With support from the U.S. National Science Foundation, cognitive neuroscientist Russell Poldrack and a team at Stanford University launched new infrastructure to enable sharing. Called OpenfMRI, the website allows scientists to share their data easily and securely in a standardized format.

Learn more about the effort in a Science Nation video on the fMRI work, and below Poldrack and Krzysztof Gorgolewski, a post-doctorate student who is also part of the Stanford team, answer questions about the project.

NSF: What kinds of tasks do you have people do for the tests?

R.P.: My lab studies a fairly broad set of behaviors related to decision making and self-control. Our participants perform psychological tasks while in an MRI scanner, which we use to measure their ongoing brain activity. For example, to study simple acts of self control we present the participant with stimuli (such as arrows pointed left or right) and ask them to press a button corresponding to the arrow, unless they hear a beep, which is their signal to stop their response. Using this task we have identified a circuit in the brain that is involved in the inhibition of motor responses. We study more complex decision making using tasks where people make decisions about risk versus reward. For example, in one task they must decide at each moment whether to continue pumping up a virtual balloon presented on the computer screen; every time they pump the balloon they get more money, unless it explodes in which case they lose the money accrued so far for that balloon. This task allows us to assess how people integrate information about risks and rewards in decision making.

R.P.: Yes and No. Overall, people generally produce similar patterns of activity on many cognitive tasks; if they didn't, then fMRI wouldn't work at all! However, there are some tasks on which activity differs substantially between people, sometimes in relation to different psychological functions. There is great interest in understanding these individual differences in brain function.

NSF: fMRI has become controversial for criminal cases, do you think the technology is too immature for use in courts?

R.P.: Yes. Before it can be used in the courts we need better validation that it can demonstrate what is being claimed. In addition, we know that there are countermeasures that one could use to fool it, so those must be addressed as well.

NSF: How does this fMRI database compare to other medical databases, and the potential impact (such as genome or criminal databases)?

R.P.: The OpenfMRI database is much smaller than the other databases that you mention. In addition, unlike criminal databases, there is no identifying information provided about the individuals in the database. Currently we think that OpenfMRI is primarily useful as a research tool.

NSF: How does the Open fMRI platform work?

R.P.: Researchers who want to share their data must first upload the data to the system, where it will undergo curation by our team. This includes processing the data using automated analyses implemented on supercomputers at the Texas Advanced Computing Center. After this curation takes place, we put the data onto the web site so that any interested researcher can download it and use it for their research.

NSF: Who can contribute data, and what kind of data have you collected so far?

Krzysztof Gorgolewski: We are open for contributions from anyone and everyone. So far we have submissions from many labs both in Europe and the United States. Most datasets focus on measuring brain activity during different cognitive tasks using MRI, but we also have a few datasets that include other modalities, such as electroencephalograms. Each dataset is different and it's very exciting to see how different experiments are designed. The diversity of our database allows researchers to get a unique perspective on how the brain deals with a variety of cognitive tasks.

K.G.: Anyone can access the data. It is distributed under a broad license giving anyone unrestricted access. This way we are maximizing reuse by including groups outside of academia such as journalists or citizen scientists.

NSF: How do you protect this data from hacking if it's on the cloud?

K.G.: Since the data is publicly available to anyone, we don't need to worry about protecting it. This is possible because we are removing any information that could compromise the privacy of volunteers participating in the studies. By making the data publicly available we are maximizing the impact of the time donated by study participants.

NSF: How widespread do you want this database to be?

K.G.: Our mission is to make this data available to the broadest possible audience. We see not only cognitive neuroimaging researchers using this data but also people from other fields, such as machine learning.

NSF: Where is this technology, and research, heading?  Are there any significant milestones that are left to reach in regards to the improvement of fMRI?

R.P.: The technology is constantly improving, and the ongoing work through the BRAIN initiative will provide even better tools for brain imaging. The one major missing link is whether we can actually image brain electrical activity (as opposed to blood flow) using MRI; this has been investigated for several years, but so far has not come to fruition.