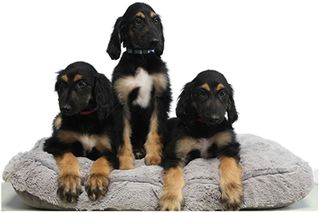 Purebred puppies from the same litter tend to look pretty much the same. But a trio of littermates born recently in Korea don't just closely resemble each other — they're clones that share nuclear DNA from the same cells.

In fact, those cells originated in a dog that was also a clone, making the puppies second-generation clones. The cell donor, the first cloned dog in the world, was a male Afghan hound named Snuppy (his name came from the initials of Seoul National University, the Korean institution where the research was conducted), who was born in 2005.

The three "recloned" puppies, now just over one year old, developed from stem cells harvested from Snuppy in 2010. They were described in a study that marks the first stage in documenting and analyzing their fitness, to better understand how recloned dogs fare throughout their lifetimes, the study authors wrote. [8 Mammals That Have Been Cloned Since Dolly the Sheep]

Animal cloning has existed since 1952, when scientists first cloned a tadpole by removing the nucleus from a somatic cell — any cell in the body other than a sperm or egg — and transferring it into a frog egg to replace the original nucleus, a process known as somatic cell nuclear transfer.

But it took decades for scientists to work their way up to cloning mammals, finding their first success with Dolly the sheep in 1996. In the years since, scientists have cloned mice, pigs, cats, rabbits, goats and cattle, but the oddball reproduction of dogs presents unique challenges for cloning, according to the new study. Female dogs only come into heat once a year, and the ovulated eggs aren't ready to be fertilized immediately. Rather, the eggs mature in the oviduct as they move toward the uterus, which makes it harder for scientists to harvest them at just the right time, the study authors reported.

Snuppy was cloned from an ear cell taken from an adult Afghan hound named Tai. Tai was euthanized after a cancer diagnosis at the age of 12, and Snuppy, after a healthy life, died of cancer when he was about 10 years old, which is within the normal lifespan for the breed, the researchers noted. This suggests that clones do not necessarily experience shortened lives, as was suspected when Dolly the sheep died at the age of six (the normal lifespan for Finn Dorset sheep — Dolly's breed — is 11 to 12 years).

Snuppy's success encouraged the scientists to reclone the clone, and they implanted 94 embryos grown from his cells into seven female dogs. Four of the embryos grew to term and were healthy and normally formed at birth, but one puppy died several days later from acute diarrhea, the cause of which was unknown. The three surviving puppies are currently healthy, and based on Snuppy's life history, the researchers do not expect the reclones to suffer from accelerated aging or to be more disease-prone just because they are clones, they wrote in the study.

"With the data from Tai and Snuppy in hand, we are excited to follow the long-term health and aging processes of these second generation of clones and work with them to contribute to a new era of studying longevity of cloned canines," the study authors concluded.

The findings were published online Nov. 10 in the journal Nature: Scientific Reports.