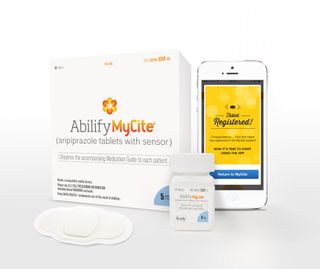 Abilify MyCite comes with an adhesive sensor (seen in the lower left of this image) and a smartphone app.
(Image: © Courtesy of Otsuka America Pharmaceutical, Inc.)

A new "digital pill" can tell doctors whether a patient has taken his or her medicine. The pill, which was approved by U.S. Food and Drug Administration on Nov. 13, sends a signal to a wearable sensor when a patient has taken the medication, and that information is then sent to a doctor's office.

The whole system is called Abilify MyCite, and consists of the pill, the wearable sensor and a smartphone app. The actual drug is Abilify (generic name aripiprazole), a medication used to treat schizophrenia and bipolar disorder. The drug is sold by Otsuka Pharmaceutical, and the sensor in the pill was built by Proteus Digital Health.

But how does the system work? [Bionic Humans: Top 10 Technologies]

Though the idea may sound like something out of a sci-fi movie, the technology is based on a principle first outlined more than 200 years ago, said Dr. George Savage, chief medical officer and co-founder of Proteus Digital Health.

In 1800, Alessandro Volta invented a battery consisting of two dissimilar metals (zinc and copper) in a solution of sulfuric acid and brine, Savage said. Batteries are made in a similar way to this day.

Embedded in the pill is a sensor that consists of a silicon chip with the logic circuit, along with two pieces of metal: copper and magnesium, Savage told Live Science. When the sensor is dropped into a solution of water or any other liquid that has polar molecules (such as the hydrochloric acid in the stomach, which dissolves the pill, leaving the sensor behind), the device will generate a current. The current is very small, but it's enough to run the chip.

"Technically, it's a partial power source," Savage said. "The patient becomes the battery."

Once activated, the chip — only 1 millimeter on a side, and 0.3 mm thick — sends a very simple signal, one that encodes only a single number. That number identifies the pill and tells the wearable, adhesive sensor — basically an adhesive bandage, Savage said — that it has been ingested.

The pill's signal isn't a radio signal, though, Savage said. The chip's logic circuit makes a small modulated current — a graph of the current levels would look like a sine wave. Since the human body is conductive, the wearable sensor can pick up the changes. The modulated current can encode ones and zeroes, similar to an FM signal, Savage said.

"It works in a similar way as an EKG," or electrocardiogram, Savage said. These machines pick up on changes in electrical current in the body to monitor heartbeats. The wearable sensor does the same thing, though the current is smaller, he said.

From patient to doctor

The wearable sensor, which is an adhesive patch worn on the abdomen, can detect how active the patient is, like a Fitbit, said Bob McQuade, the chief strategy officer at Otsuka Pharmaceutical. It can also check if the person taking the pill is lying down. [5 Ways Computers Boost Drug Discovery]

From the wearable sensor, the information that the patient took a pill, and whether they are moving, standing or sitting, is sent to the smartphone app via Bluetooth. The app then asks the patient how they feel, and records the response. If the patient consents, the app can send the time they took the pill, their activity level and their self-reported stress to their doctor, who can look at the data over time and get an idea of how routine the patient's medication use is. So, for example, the doctor might know if the patient always takes the medication at the same time of day, or if there is a tendency to forget to take a pill now and then.

McQuade noted that even though the data lets doctors monitor if patients have taken their medicine, there's no evidence that the system improves adherence, meaning that the patient takes the medicine as directed.

"Those experiments haven't been done yet," McQuade told Live Science. Even so, this kind of data might help doctors talk to patients about medication usage and perhaps identify good habits, he said.

Savage noted that adherence and proper use is an ongoing problem. For example, many people who miss a day's medication — whatever it is for — will take two pills the next day, even though people shouldn't do that with some drugs. "People do things that are logical at work, for instance — you miss a day, [so] you come in and do more work — but not in pharmacology."