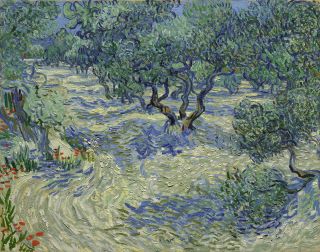 You can't see the grasshopper in this image of Vincent van Gogh's "Olive Trees," but it's there.
(Image: © Courtesy of the Nelson-Atkins Museum of Art )

There's a secret hidden in a Vincent van Gogh painting.

It remained undetected for 128 years, until Mary Schafer, a paintings conservator at Nelson-Atkins Museum of Art in Missouri, discovered it with the aid of a surgical microscope — imbedded in the paint in the foreground of van Gogh's 1889 work "Olive Trees" are the remains of a tiny grasshopper.

"I came across what I first thought was the impression of a tiny leaf," Schafer told Live Science. "But then, I discovered it was in fact a tiny insect."

Conservators like Schafer can be like detectives, uncovering clues in their careful studies of works of art hat reveal new details about their origins and contexts. Many of history's artists worked outdoors, Schaefer said, especially in the 19th century. [11 Hidden Secrets in Famous Works of Art]

"You can find sand in the paint from beach scenes, plant material in forest scenes," Schafer said.

Researchers already knew that van Gogh, in particular, liked to paint while outdoors — and occasionally wrangled with a wayward bug — thanks to a letter he wrote to his brother Theo in 1885, according to a museum press release:

"But just go and sit outdoors, painting on the spot itself!" the letter reads. "Then all sorts of things like the following happen – I must have picked up a good hundred flies and more off the 4 canvases that you'll be getting, not to mention dust and sand … when one carries them across the heath and through hedgerows for a few hours, the odd branch or two scrapes across them…"

Still, Schafer hoped that further study of "Olive Trees" might reveal new details about the context in which it was painted.

"We're trying to apply scientific means [to understanding the art in the museum]," she said.

Schafer contacted Michael Engel, a professor of paleoentomology at the University of Kansas and an associate at the American Museum of Natural History, to see what he could glean from her discovery —  including, perhaps, the season in which it was painted.

But there was one problem: The little critter's remains were incomplete. The thorax and abdomen, which might have contained the remains of its last meal — which, in turn, might have offered clues as to the season in which it died — were missing. Nor was there any sign that the insect struggled to escape the sticky paint.

Schafer said she suspects the dead grasshopper was already on van Gogh's brush when he pressed it into his characteristically thickly painted "Olive Trees." [Gallery: 5 Times Science Inspired Art]

The discovery itself may not be very important in strict scholarly terms, Schafer said, but she's glad that it's sparked the public's interest, with museum visitors crowding the painting to hunt for specks of the grasshopper's remains.

It also offers the public a window into the work of conservators. Schafer and her colleagues work in near silence, she said, with painting and photography conservators gathered in the same room. An array of equipment, some of it borrowed from other precision professions, sits on their desks. The microscope's arm comes down across the table, and the conservators adjust its position as they move across their subjects.

"Under the microscope, you can really see the paint in a three-dimensional way," Schafer said.

While Schafer said she's glad of the attention the discovery has received, a grasshopper is far from the most exciting thing a conservator has discovered in artwork; the real drama lies in finding traces of an old painting behind the current paint on a canvas, or signs of alterations. (In 2008, scientists announced they had discovered the portrait of a woman hiding beneath van Gogh's "Patch of Grass" painting.)

Still, she's glad of the attention it's brought to "Olive Trees."

"Whenever we can tie something to the artist and their work, we're happy," she said.