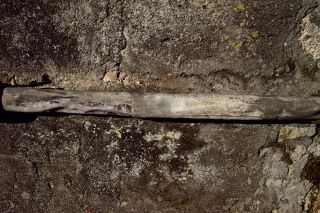 Water carried by lead pipes in Pompeii had a little something extra — toxic antimony, which likely sickened many residents and may even have been lethal.
(Image: © PHAS/UIG/Getty)

When Mount Vesuvius in southwestern Italy erupted in A.D. 79, it engulfed the city of Pompeii so quickly that residents barely had time to react to the impending disaster before it killed them. Their final moments were frozen in time as people were buried in layers of hot ash, their lives snuffed out in moments.

But even before the volcanic eruption, Pompeii was harboring another hidden and potentially deadly threat, one that flowed through its water system and into its homes.

Recent tests of a lead water pipe fragment from the ancient city show evidence of antimony, a highly toxic metallic element that was historically mixed with lead to strengthen it. [Preserved Pompeii: Photos Reveal City in Ash]

Lead pipes, which were widely used as water conduits throughout the Roman Empire, are now known to be a poor choice for carrying drinking water. Though lead is less prone to corrosion than other metals, lead particles leach into water and can build up in the human body, causing lead poisoning. Over time, accumulation of lead in adults can harm the kidneys and the nervous system, and can even cause strokes or cancer, Live Science previously reported. Children and babies are especially vulnerable to lead poisoning, which can lead to developmental delays.

But the metallic element antimony may have posed an even greater threat to the health of the ancient Romans, according to the new analysis of the pipe fragment from a home in Pompeii. Based on the amount of antimony found in the fragment, the city's water supply system would have contained sufficient quantities of the metal to cause daily bouts of diarrhea and vomiting, potentially resulting in severe dehydration and even liver and kidney damage over time, the researchers reported.

Since the early 18th century, historians have argued that the systems of lead pipes branching through Roman cities would have led to chronic lead poisoning that eventually caused the empire's fall.

But lime in the water likely prevented that, the study authors wrote. In recent decades, other researchers suggested that the inner surfaces of Roman pipes would have quickly calcified with limestone after a few months at most, shielding the water from harmful lead particles thereafter.

However, antimony is much more toxic than lead. Before protective calcite layers formed in the pipes, even small amounts of antimony that seeped into the water would have sickened people very quickly, leading to cardiac arrest in severe cases, the scientists wrote.

To identify the compounds in the pipe fragment, the researchers used a method capable of detecting even small amounts of metallic and nonmetallic elements. They dissolved a sample in concentrated nitric acid and then heated it to 10,832 degrees Fahrenheit (6,000 degrees Celsius) to ionize the elements — adding or removing electrons to change their charge — so they could be identified and analyzed within a mass spectrometer.

Based on their analysis, the antimony concentration in the pipe was about 3,680 micrograms, approximately 0.0001 ounces. This may not sound like much, but in actuality it's an "alarming level" to find in proximity to drinking water, and would have been sufficient to cause serious symptoms of antimony intoxication, the study's authors wrote.

And Pompeii's nearness to the volcano may have made their antimony problem worse than other Roman cities with similar water systems. Antimony occurs naturally in the groundwater close to volcanoes, and Pompeii's proximity to Mount Vesuvius could have provided toxic antimony concentrations in the water that were even higher than in a typical Roman city at the time, according to the study.

As their tests were carried out on only a small fragment of pipe from Pompeii, further tests would be needed to confirm how widespread this problem may have been throughout the Roman Empire, investigating more lead pipes as well as human remains from the period for traces of antimony in their bones and teeth, the researchers noted.

The findings were published online Nov. 5 in the journal Toxicology Letters.