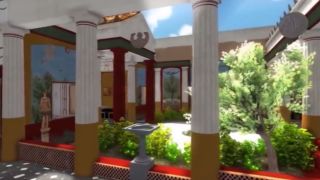 Researchers used 3D technology to digitally reconstruct a wealthy home in Pompeii, showing how it might have looked before Mount Vesuvius erupted in A.D. 79.
(Image: © Lund University)

Archaeologists have digitally reconstructed a house in Pompeii to show what life must have been like for a rich Roman banker 2,000 years ago.

The Italian city was famously buried in volcanic ash —and frozen in time — in A.D. 79, when Mount Vesuvius erupted. The vast ruins of Pompeii have been explored since the 18th century, and archaeologists today still flock to the site to uncover more of the city's secrets.

Since 2000, the Swedish Pompeii Project has been working to document an entire city block, or "insula," in close detail. This block included three big estates, a tavern, a laundry, a bakery and several gardens. [11 Famous Places That Are Littered with Dead Bodies]

Led by Anne-Marie Leander Touati, an archaeologist at Lund University, the Swedish team has used traditional excavation methods as well as more advanced techniques like laser scanning and drone imaging to digitally reconstruct that block. The researchers have now completed their first 3D models showing this section of the city as it stands today.

Using their new models as well as sources like archaeological findings, old photos of lost frescoes and 19th-century drawings of the site, the researchers made a more detailed reconstruction of the home where a man named Caecilius Iucundus and his extended family would have lived. The reconstruction reveals how the house looked before the volcanic eruption.

"By combining new technology with more traditional methods, we can describe Pompeii in greater detail and more accurately than was previously possible," Nicoló Dell'Unto, digital archaeologist at Lund University, said in a statement.

Iucundus had a social status just below that of the richest and political elite in Pompeii. Archaeologists have some clues about Iucundus' business dealings because of the wax tablets that were preserved in a wooden chest in the home. Many of these tablets relate to auction sales of property (including slaves), and it seems that Iucundus worked as a middle man between the seller and buyer.

A new video tour put together by the university brings the reconstruction to life, showing the entrance room where the man likely received business partners in the morning, and where weaving women and other house workers would have spent their time in the afternoon. The reconstruction also shows an ornate house alter, decorated with a scene of an earthquake that rocked Pompeii 17 years before the eruption of 79.

The Swedish team has made some other discoveries through their research on this insula. They uncovered some floor surfaces in different rooms around the insula for the first time since 79, and found evidence that water must have been flowing from one of the insula's fountains at the time of the Vesuvius eruption. In one shop, the archaeologists even found a stack of intact windows made out of translucent crystalline gypsum.