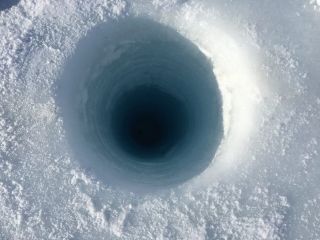 The expedition members hope to dive beneath the ice up to four times a day.
(Image: © Patrick Degerman)

Chill-proofed divers are about to plunge beneath the Ross Ice Shelf in Antarctica in an attempt to figure out how global warming is affecting the diverse array of life that hangs out there.

And for the first time, they are recording 360-degree video of the entire six-week expedition to create a virtual-reality experience of the mysterious polar environment above and below the ice.

"The aim of the outreach is to raise awareness about the unique and fragile Antarctic coastal under-ice ecosystems and the broader effect climate change might have on the ecosystems and the whole planet," Alf Norkko, a marine biologist at Helsinki University, said in a statement.

Norkko is one of three Finnish members of the expedition, along with University of Helsinki marine biologist Joanna Norkko, who is also married to Alf Norkko, and the explorer and photographer Patrick Degerman, which set out Thursday (Oct. 26) from Scott Base in Antarctica. [In Photos: Diving Beneath Antarctica's Ross Ice Shelf]

In addition to their scientific studies and diving duties beneath the ice shelf, the Finnish team members are responsible for shooting the 360-degree video and keeping the world informed through a series of regular updates, photographs and videos on their Facebook page.

Science under the ice

Last week, the team from Finland joined six researchers from New Zealand's National Institute of Water and Atmospheric Research and the University of Auckland at Scott Base, on Ross Island in McMurdo Sound in the New Zealand Antarctic territory, a short distance from the large U.S. Antarctic base, McMurdo Station.

The digital equipment for the social media component of the expedition includes 32 cameras, three drones, a remote-controlled drone submarine and "countless" batteries, the team said.

Their updates, photographs and digital recordings will be sent from the field through scheduled communications over satellite telephone to a back-up team at the University of Helsinki.

They also have five 360-degree video cameras to shoot the virtual-reality record of their work, which will become available in early 2018, after it can be processed and edited back in Finland.

Bad weather and low visibility delayed their departure for several days, but yesterday, the expedition members made the journey to their first camp on the Ross Ice Shelf, near New Harbour in the Ross Sea, about 50 miles (80 kilometers) from Scott Base. [Antarctica: 100 Years of Exploration (Infographic)]

Joanna Norkko told Live Science in an email that the expedition team would spend about 20 days diving and taking samples from the sea floor at New Harbour before moving on to a second site on the ice at Cape Evans on Ross Island, about 18 miles (30 km) from Scott Base.

Depending on the weather and ice conditions, the team would reach the new site either by helicopter, or by traversing the sea ice, with the expedition equipment being pulled by Hägglund and PistenBully snow vehicles, she said.

Both sites on the Ross Ice Shelf were chosen because they will allow comparison studies to be made with the results of previous expeditions, Joanna Norkko explained. [Life on the Edge: Photos from Drilling the Ross Ice Shelf]

"The objective of this diving expedition is to examine the sensitivity of Antarctic seafloor communities to climate change," Norkko said. "This area is special, because it is the most southerly marine ecosystem on the planet."

The team made their first visit to the sites in 2001 and several times since then. "Each time the seafloor communities have been sampled in a standardized way, so these sites are so-called monitoring sites [where] we can start assessing whether there have been any changes," she said.

Seven of the nine-member team would be diving beneath the ice, and they hoped to complete four dives each day by two-person diving teams, for a total of 60 dives during their six weeks of fieldwork on the ice shelf, Joanna Norkko said.

Safety while diving under the ice will be a top priority, she said: Whenever two divers enter the water, one safety diver will be suited up on the surface and ready to jump in immediately if there is a problem. The divers will also be attached to ropes and can communicate with team members at the surface through rope pulls, she said.

The water temperatures will be around 28.6 degrees Fahrenheit (minus 1.9 degrees Celsius), which is below the normal freezing point because of the high salinity — so the divers could get very cold in a 45-minutes dive despite their thick diving suits, she said. There is also a danger of their metal regulators freezing up, which means they have to carry extra tanks and regulators.

In addition, for each dive the expedition members will need to melt two access holes into 10-foot-thick (3 meters) ice, so that one could be used as a safety hole if the divers could not return through the main hole, she said.

"The greatest risk is posed by seals, who in general are harmless, but who might take a fancy to our nice dive holes and just decide to occupy them," Joanna Norkko said. "A 300-kilogram [660 lb.] seal that does not want to move away from your dive hole is a bit of a problem."