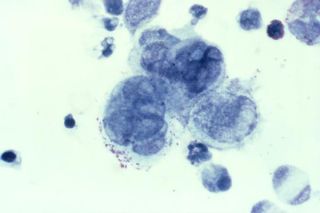 A micrograph picture of the herpes simplex virus, within tissue taken from a penile lesion of a patient with genital herpes.
(Image: © CDC)

Viruses are tricky beasts. Some of these "submicroscopic" pathogens can "go to sleep" inside a person's body, essentially hiding from the immune system indefinitely, only to reactivate and cause illness later.

Now, scientists have learned how to prevent one type of virus, the herpes virus, from slipping into its sleep-like dormant phase and out of sight. This is a major step in understanding the virus's unique ability to essentially hide from the immune system, the scientists say.

More than 80 percent of the world's population is infected with herpes simplex virus (HSV), according to the World Health Organization, which includes HSV-1, which causes cold sores, and HSV-2, which causes genital warts.

But most people who are infected with the virus have no symptoms until something external — stress, illness or even sunlight, for example — triggers the virus to wake up and start replicating and spreading. This, in turn, prompts the immune system to attack the virus, resulting in inflammation and the characteristic blisters around the mouth, lips, nose or genitals. It's during this "reactivation" that the virus can spread from person to person. [The 9 Deadliest Viruses on Earth]

Unlike viruses such as those that cause the common cold or the flu, the herpes virus usually quickly enters a latent, or dormant, mode, in the human body. Scientists have tried to study this process. But in a laboratory setting, they have had difficulty placing the live virus to "sleep" without extreme and harmful measures, akin to clubbing your subject into an unconscious state and hoping it wakes up normally.

Now, in the first of two advances, scientists at Princeton University have developed a laboratory technique that more naturally induces the herpes virus into a latent mode, as gently as a lullaby, allowing them to better simulate the natural life cycle of the herpes virus. The same group of researchers then used this technique to find a key set of proteins involved in the virus's tendency to sleep and wake.

The findings were published yesterday (Oct. 27) in the journal PLOS Pathogens.

Viruses that don't quickly go into hiding are easier for the immune system to find and kill. But this is not the case for the herpes viruses, which stay with you for life.

These viruses are part of a subfamily of the virus called alphaherpesvirinae, which is known to infect and then hide in nerve cells. The immune system has learned to treat these viruses with kid gloves, because immune cells can't outright kill these herpes viruses without killing the nerve cells that serve as a host.

"Usually, killing a virus infection by the immune system involves killing the infected cells," said senior study author Lynn Enquist, a professor in molecular biology at Princeton University. But "in this case, these cells would be the [nerve cells] that are irreplaceable. So, 'putting the virus to sleep' is a better and more protective way for the nervous system."

A major question about herpes, however, is although the virus can sometimes cause symptoms immediately, why, most of the time, does it go into hiding right away?. The answer would reveal better ways to control infections.

To get to the heart of the issue — what causes the natural virus to stay awake and "escape from silencing," as the researchers described it — the scientists used a type of herpesvirus called pseudorabies virus, which is closely related to HSV-1.

The researchers' first step was to develop a method that would essentially put the virus to sleep in infected nerve cells. The technique involved using a novel three-chamber environment in which the nerve cell's nucleus and its tentacle-like axon structures are isolated.

Then, the researchers focused on how to wake the virus up. They discovered two ways to do so: with chemical stress signals present at the time the virus enters the cells, as expected; or in the presence of a cluster of proteins called viral tegument proteins, a new concept.

Further analysis ruled out a hypothesis that perhaps it's the size of the viral load, or the amount of virus in a person's system, that somehow overrides the typical immune response to let the viruses sleep. Rather, the researchers found that the viral tegument proteins alone were the key trigger, acting like a splash of ice water on the face of the viruses, waking them up or otherwise keeping them awake and active.

"The question we and others are working on now is to determine if" this approach for waking viruses up in the lab is the same as what goes on naturally in the immune system when a virus wakes up, Enquist told Live Science. "We think there is a lot in common." [Tiny & Nasty: Images of Things That Make Us Sick]

The Princeton researchers' technique "represents an important advancement," in studying the virus latency cycle and controlling infections, said Felicia Goodrum Sterling, an immunologist at the University of Arizona Cancer Center, who was not involved in the research.

"In understanding herpesvirus latency, model systems are everything," Goodrum Sterling said. "This is the first model system that does not require drug treatment" to put viruses to sleep.

A better understanding of this mechanism, the researchers said, may lead to a class of drugs that could target viral tegument proteins to prevent them from waking up viruses or keeping them awake, thus preventing symptoms and the spreading of the virus to other people.