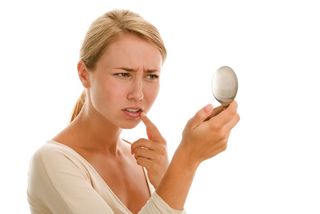 Cold sores can be caused by HSV-1.
(Image: © Cold sore photo via Shutterstock)

A herpes virus that infects humans originated in chimpanzees before it jumped into early human ancestors, according to a new study.

About two-thirds of the human population is infected with at least one kind of herpes simplex virus, according to the researchers. HSV-1 commonly manifests itself as cold sores on the mouth or lips, whereas HSV-2 can cause blisters on the genitals.

Humans are also the only primate species that can be infected by more than one herpes simplex virus, the researchers said. [10 Deadly Diseases That Hopped Across Species]

In the study, the researchers compared human herpes viruses with those of other primates. They used advanced models of molecular evolution to estimate when and how exactly the viruses had diverged from each other, and how they were introduced into humans.

Now, humans and chimpanzees have their own version of the HSV-1 virus, he said.

The results may help scientists better understand the mechanism of species-to-species transmission, which still happens, the study authors said. For instance, people today often get infected with a macaque simplex virus, which can result in severe illness, the researchers wrote in the study. But human-to-human transmission of this virus is extremely rare, they wrote.

"Understanding how and when we acquired viruses that currently infect us can give us perspective on future, potential cross-species transmission events that would lead to the introduction of new human viruses," Wertheim said.

"Knowing that some of our viruses are much older and some of them are more recent is important for that perspective," he said.

For instance, cross-species transmissions of some viruses, such as the one that causes severe acute respiratory syndrome (SARS), are very recent, whereas other viruses such as HIV are slightly older, about 100 years, Wertheim said.

The study was published in the June 10 online issue of the journal Molecular Biology and Evolution.