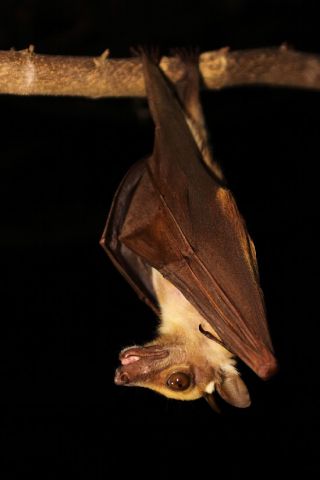 Much of a family of viruses containing a variety of disease-causing nasties, from the mumps virus to Hendra, appears to have jumped from bats to other animals, including us,a new study suggests.

To better understand the evolution of paramyxoviruses — which also causemeasles, distemper and respiratory infections as well as deadly, newlyemerging Hendra — scientists looked for them in 9,278 individual bats and rodents at sites around the world.

Bats and rodents are known to carry these viruses, and both animals' habit of living in large groups makes them good reservoirs for the viruses that can spread to neighboring humans or livestock.

While sorting viruses into species is tricky — in fact, they generally aren't considered to be alive — the researchers estimated they had found 66 new paramyxoviruses based on genetic differences between the viruses.

Their finds included viruses that appear to beclose relatives of those known to infect humans or other animals. [10 Deadly Diseases That Hopped Across Species]

"I can't say we have found measles exactly," said study researcher Dr. Christian Drosten, a professor of virology at the University of Bonn in Germany. "What we have found is surprising genetic diversity around the measles virus."

There was one exception: Mumps. Drosten and colleagues did find the human mumps virus in African fruit bats.It, too, appeared to have relatives in bats.

"Around (the mumps virus)there are so many viruses. We found this virus, the brother, the sister and so on," Drostensaid.Related viruses were typically found within the same social group of animals, but also among animals living far apart or among different species.

The greater degree of genetic diversity of the mumps virus in bats than in humans indicates it started out there before jumping to humans, Drosten said.

Drosten and the international team constructed a phylogenetic, or family, tree for paramyxoviruses using genetic information from those they found as well as those already known. They used the tree to examine which large groups of mammals were infected with different viruses and how these changed over time. The results implicated bats as the ancestral hostsfor two major subfamilies among the paramyxoviruses.

Paramyxoviruses can also infect nonmammals, but little is known about them, according to Drosten.

Vaccination campaigns intended to eradicate diseases, such as smallpox, the livestock-afflicting rinderpest or measles, assume there is no animal reservoir for the virus from which it might return. But these results indicate this assumption should be reconsidered, Drosten said.

"It’s really a wake-up call to incorporate ecological knowledge into the planning of eradication campaigns," he said. "It’s a matter of looking where exactly the viruses are and assessing risk."

The results also indicated the Hendra and Nipah viruses, which cause deadly encephalitis in Asia and Australia, appear to have originated in bats in Africa, where many cases may be going undiagnosed because of a lack of medical infrastructure, he said.

While viral infections were spread out in bats, among all of their major lineages, infections were found only in certain groups of rodents where the viruses were less diverse, they found.

The 86 species of bats sampled represent only 7.5 percent of bat species, so the picture is far from complete.

Drosten cautioned that getting rid of bats is not the answer. He pointed out that the destruction of habitat, such as the rain forest in Africa, is forcing bats, and other wildlife, closer to humans, contributing to a rise in disease epidemics.

The study appears in Tuesday's (April 24) issue of the journal Nature Communications.