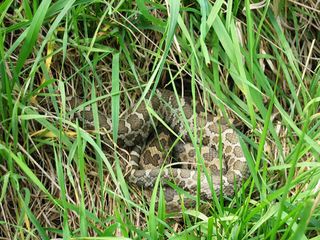 In south-central Illinois, rare rattlesnakes have been dying from what appears to be aggressive fungal infections that cause grotesque facial lesions.

"What is kind of scary about it is it loves the skin, but once it gets through the skin, it will invade muscle and bone and it is extremely destructive," said Matthew Allender, a wildlife veterinarian affiliated with the University of Illinois who has been studying these infections."I've never quite seen anything like this in a reptile."

Since 2008, four confirmed and two probable cases have turned up in a population of eastern massasauga rattlesnakes of about 50 to 60 individuals. (This species of snakes are candidates for listing under the federal Endangered Species Act.) Allender has tried, unsuccessfully, to treat two of these cases, but all have been fatal. [7 Shocking Snake Stories]

A soil-dwelling fungus, Chrysosporium, appears to be responsible. It is a not-too-distant relative of another soil fungus turned killer. Geomyces destructans was recently confirmed as the cause of white-nose syndrome, which has been decimating bat populations in the eastern U.S. after first being spotted in a cave near Albany, N.Y., in 2006.

Fungal pathogens have been increasingly associated with epidemics in wildlife, he notes in a report published in the journal Emerging Infectious Diseases in December. Amphibians around the planet have been devastated by chytridiomycosis, a fungal disease.

Allender suspects the handful of cases he's seen among the eastern massasauga rattlesnakes are just the tip of a larger phenomenon. Other biologists have told him they have seen similar infections accompanied by the fungus in rattlesnake populations in the northeastern United States.

"We are at the early stage where white-nose syndrome was four years ago, where they had all these outbreaks they were starting to see, then starting to investigate," Allender said.

The eastern massasauga rattlesnakes were once plentiful, but loss of habitat has reduced their numbers and driven them into closer quarters.

This gives rise to one possible scenario that might explain the outbreak of the disease: Once crowded together, the snakes are more likely to interact and pass the fungus to one another. Chrysosporium may also represent a new and devastating "superbug,"or there may be something in the environment that is weakening the snakes' immune systems, leaving them more vulnerable to an infection they could once fight off, Allender said.

Allender is collaborating with biologist Michael Dreslik of the Illinois Natural History Survey Prairie Research Institute, who conducts the population surveys that have uncovered the sick rattlesnakes. This year's survey will begin in the coming month, Allender said.