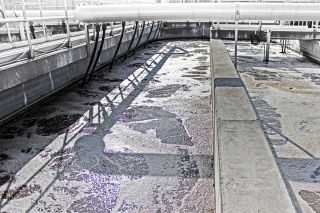 The Klosneuvirus was discovered here, at this wastewater treatment plant in Klosterneuburg, Austria.
(Image: © Marton Palatinszky)

New giant viruses found at an Austrian wastewater treatment plant probably evolved from a smaller virus that picked up bits of genome from its hosts and incorporated it, Frankenstein-like, into its own genetic code.

The viruses — four species in a new group dubbed the Klosneuviruses — are a type of Mimivirus. The giant viruses in the Mimivirus group were discovered just in 2003. Giant viruses live up to their name: They can reach sizes of up to 500 nanometers in diameter, compared to a few dozen nanometers for typical viruses. Giant viruses also have more complicated genetic machinery than their tinier cousins.

One of the new Klosneuviruses, for example, is so big that it carries transfer ribonucleic acids (tRNA) that can translate the genetic code for 19 out of the 20 protein-building amino acids found in nature. (Translation is part of the process in which a gene's instructions are decoded and carried out. Viruses use tRNA in their replication process, but not all of them have their own tRNA; some hijack their hosts'.) That's impressive, even for a giant virus, scientists led by Tanja Woyke of the Department of Energy's Joint Genome Institute reported April 6 in the journal Science. [The 9 Deadliest Viruses on Earth]

"Since protein synthesis is one of the most prominent hallmarks of cellular life, it shows that these new viruses are more 'cell-like' than any virus anyone has ever seen before," study co-author Eugene Koonin, a computational biologist at the National Institutes of Health, said in a statement.

The discovery of the new viruses was accidental — but enlightening. The research team was combing through genetic sequences from a wastewater treatment plant in the town of Klosterneuburg, Austria, trying to understand bacteria that convert ammonia to nitrate during the treatment process.

"Finding a giant virus genome took the project in a completely new and unexpected, yet very exciting direction," Woyke said in the statement.

The enormous genomes of the new viruses allowed the researchers to compare them to other giant viruses and to the lineages of the Mimivirus group. The analysis showed that the Klosneuviruses were a patchwork of genetic information, much of it picked up from host cells over long periods of time. This piecemeal approach to building a giant virus suggests that these viruses arose from smaller viruses, not from the paring down of ancient cells, which has also been suggested.

"The discovery presents virus evolution for us in new ways, vastly expanding our understanding of how many essential host genes viruses can capture during their evolution," Koonin said.

The viruses probably infect single-celled microorganisms called protists that live in the wastewater treatment plant, the researchers found. Giant viruses have also been found in marine environments, in pond sludge and even deep in permafrost. Others are likely still waiting to be discovered, Koonin said.

"I'm quite confident that the current record of the genome size of giant viruses will be broken," he said. "We are going to see the real Goliaths of the giant virus world."