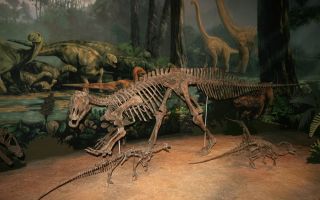 A plant-eating dinosaur that lived 112 million years ago got its fair share of bad breaks: Its fossilized bones indicate the dinosaur suffered from broken bones that may have led to a deadly blood infection, new research finds.

It appears that the long-tailed dinosaur, a 16.5-foot-long (5 meters) Tenontosaurus tilletti the length of two pool tables, fell over sideways, as four of its five injuries were on the left side of its body, the researchers said. But it's unclear whether it sustained these wounds because it was clumsy or because it was the victim of an attack, said study lead researcher Tyler Hunt, a master's student in the Department of Biology at the University of Oklahoma and the Sam Noble Oklahoma Museum of Natural History.

The dinosaur survived long enough for its injuries to heal, but its maladies probably led to its demise. "It is likely that these injuries and infection indirectly contributed to the [dinosaur's] death by inhibiting its ability to obtain food, escape predators or fight off further disease," Hunt told Live Science in an email. [Image Gallery: 25 Amazing Ancient Beasts]

Researchers uncovered the T. tilletti fossils in the Antlers Formation of Atoka County, in southeastern Oklahoma, in 2000. They were astounded to find the majority of the dinosaur's fossilized bones, prompting them to name it "The Good Tenontosaurus" because of its completeness. An analysis of its tibia (shinbone) revealed that the dinosaur wasn't fully grown, according to a 2012 study in the journal PLOS ONE.

But despite its young age, the dinosaur had accrued a lifetime's worth of injuries. It had five traumas in total: three broken ribs, a broken toe and a large, bony outgrowth on its hand bone, the researchers found.

One of the healed broken ribs was still displaced about 0.4 inches (10 millimeters) toward the spine, "indicating that a compressional force from below caused this fracture," said Hunt.

Newly laid bone on another healed rib had a large callus with three small pits on it, called lytic lesions. "These lesions are areas of localized pus accumulation resulting in the disintegration of the outer bone tissue," Hunt said. The large callus, in addition to the lesions, indicate that The Good Tenontosaurus had a bone infection known as osteomyelitis in and around its rib, Hunt said.

The dinosaur also had a "particularly severe" injury on its left toe bone, known as the phalanx. This injury was also covered in small pits, suggesting that the T. tilletti had post-traumatic chronic osteomyelitis — meaning that after the dinosaur broke the bone, "the surrounding tissue and the bone became and stayed infected during the healing process," Hunt said.

But a small injury may have had an even larger effect: On its fourth metacarpal (the equivalent of the bone under the ring finger in humans), the dinosaur had an outgrowth of bone with a tiny hole in it. This hole is called a Brodie abscess, which forms when pus-producing bacteria enter the bone. It's possible that the bacteria entered the dinosaur's bloodstream when its broken ribs and toe became infected, Hunt said.

The injuries would have impaired The Good Tenontosaurus in everyday life, Hunt said. The broken and infected toe would have led to swelling in the surrounding soft tissue, making it hard for the creature to walk. Moreover, the Brodie abscess would have been painful, and may have made it hard for the dinosaur to use its left hand when it was walking on all four legs (though it may have sometimes walked on just two legs, like the modern pangolin).

Given the challenges of living with these injuries, it's remarkable the paleo-beast survived long enough for its broken bones to heal, Hunt said. It takes about six weeks for a fractured rib to heal in humans, "so, if a similar healing rate in dinosaurs is assumed, we can tentatively say that this animal survived longer than six weeks post-injury," Hunt said. But the degree of healing and the subsequent infection indicate the dinosaur survived longer, perhaps a few months after its fall, he said.

"This number of pathologies is rare in herbivorous dinosaurs, especially pathologies that are related to trauma," Hunt said.

The research, which has yet to be published in a peer-reviewed journal, was presented in August at the 2017 Society of Vertebrate Paleontology meeting in Calgary, Alberta.