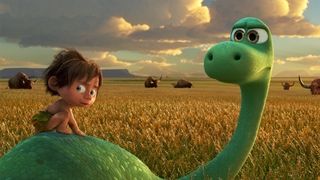 The Apatosaurus Arlo and cave boy Spot are fast friends, but only in a hypothetical universe.
(Image: © Pixar)

What if the dinosaur-killing asteroid never slammed into Earth and the paleo-beasts weren't vanquished from our planet 66 million years ago?

That's the hypothetical that forms the basis of Pixar's "The Good Dinosaur," set to hit the big screens on Nov. 25. The movie maker's answer — that a young Apatosaurus would meet and befriend a cave boy — is cute, but totally off the mark, several paleontologists told Live Science.

"It's completely impossible," said Thomas Williamson, curator of paleontology at the New Mexico Museum of Natural History and Science, referring to dinosaurs ever being alive alongside humans — something that could never happen if the dinosaurs were to survive. [Wipe Out: History's Most Mysterious Extinctions]

Though there were mammals during the dinosaur's reign of the Mesozoic era, these animals were small, no larger than the size of a house cat. It's wasn't until the nonavian dinosaurs went extinct that mammals grew in size and specialty, eventually giving rise to the human lineage about 60 million years later.

"Dinosaurs had been around for over 150 million years when the asteroid hit, and were doing quite well up until that fateful day," said Steve Brusatte, a paleontologist at the University of Edinburgh. If the asteroid hadn't hit Earth, "I have no doubt that they would have kept evolving and thriving."

If dinosaurs hadn't perished, "mammals would have never gotten their chance to evolve in that brave new world, free of their dinosaur overlords," Brusatte told Live Science. "Without mammals getting their chance, then there would have been no primates, and then no humans."

Mammals originated about 220 million years ago, about the same time as the dinosaurs during the Late Triassic. But dinosaurs got the upper hand — they diversified into thousands of species, spread around the world and grew to gargantuan sizes.

"Mammals stayed in the shadows," and none of them seemed to dominate their environment, Brusatte said. Instead, early mammals mostly ate insects, maybe seeds and the occasional tiny dinosaur, according to fossil evidence.

When the 6-mile-wide (10 kilometers) asteroid collided with Earth, mammals and dinosaurs alike suffered great losses. All of the dinosaurs — except birds — bit the dust, and about 75 percent of all animals died, said Gregory Wilson, an adjunct curator of vertebrate paleontology at the Burke Museum of Natural History and Culture in Seattle.

But there were some survivors.

"A few plucky mammals made it through the devastation of the extinction," Brusatte said. "These mammals seemed to be ones that were particularly small and had generalist diets, so they could survive by hiding and eating lots of different foods — traits that helped them endure the chaos after the asteroid hit."

Once the nonavian dinosaurs were kaput, the mammals took over their ecological niches. Within a few hundred thousand years, mammals rapidly evolved (geologically speaking) into new species, diversified their diets and achieved new sizes. About 500,000 years after the dinosaur's demise, some mammals had reached the size of German shepherds, Williamson said.

These spirited survivors are the reasons why there are more than 5,000 species of mammals today, Brusatte said. [In Photos: Mammals Through Time]

"It's pretty obvious to me that none of this could have happened if the dinosaurs didn't die out," he said. "The mammals that lived with the dinosaurs had about 150 million years to make it happen, but they could never do it. But then, boom, right when the dinosaurs died, the mammals began to explosively diversify."

Still, once "The Good Dinosaur" opens in theaters, Brusatte plans to see the film.

"I'm not expecting the film to be an accurate portrayal of dinosaurs," he said. "It's obviously not trying to be a dinosaur documentary, and that's OK. The dinosaurs may not look or behave like real dinosaurs would have, but I hope it's a good story and an entertaining film."