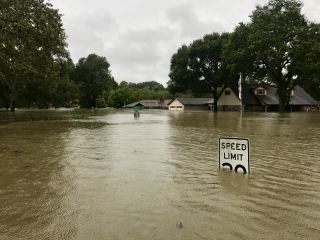 A woman in Houston contracted "flesh-eating bacteria" from water that flooded her home during Hurricane Harvey, and she ultimately died of this serious skin infection.

The 77-year-old woman, Nancy Reed, was initially injured when she fell in her home, which had been flooded by the hurricane, according to the New York Times. In addition to breaking her arm, she also sustained cuts during the fall, which allowed bacteria to enter her body. She died from her infection on Sept. 15, according to the Harris County Institute of Forensic Science.

Although commonly referred to as "flesh-eating bacteria," this condition is known to doctors as "necrotizing fasciitis." It is a serious bacterial infection that destroys skin and muscle tissue, according to the Centers for Disease Control and Prevention (CDC).

The most common way for people to get necrotizing fasciitis is when the bacteria enter the body through a break in the skin, the CDC said. The bacteria can spread quickly once they enter the body, and symptoms of necrotizing fasciitis can start within hours of an injury. The skin may become red or purplish from the infection, and some people get ulcers, blisters or black spots on their skin, the CDC said.

The condition is treated with antibiotics, but many people also need immediate surgery to remove dead tissue and help stop the infection, the CDC said.

Reed's death is the 36th fatality tied to Hurricane Harvey, according to the Harris County officials.